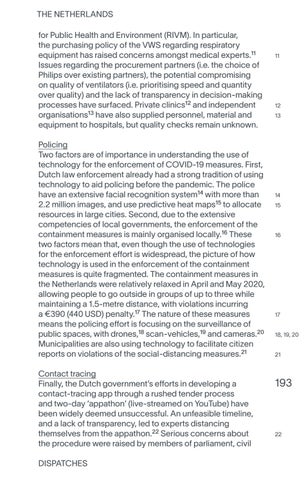 THE NETHERLANDS for Public Health and Environment (RIVM). In particular, the purchasing policy of the VWS regarding respiratory equipment has raised concerns amongst medical experts.11 Issues regarding the procurement partners (i.e. the choice of Philips over existing partners), the potential compromising on quality of ventilators (i.e. prioritising speed and quantity over quality) and the lack of transparency in decision-making processes have surfaced. Private clinics12 and independent organisations13 have also supplied personnel, material and equipment to hospitals, but quality checks remain unknown. Policing Two factors are of importance in understanding the use of technology for the enforcement of COVID-19 measures. First, Dutch law enforcement already had a strong tradition of using technology to aid policing before the pandemic. The police have an extensive facial recognition system14 with more than 2.2 million images, and use predictive heat maps15 to allocate resources in large cities. Second, due to the extensive competencies of local governments, the enforcement of the containment measures is mainly organised locally.16 These two factors mean that, even though the use of technologies for the enforcement effort is widespread, the picture of how technology is used in the enforcement of the containment measures is quite fragmented. The containment measures in the Netherlands were relatively relaxed in April and May 2020, allowing people to go outside in groups of up to three while maintaining a 1.5-metre distance, with violations incurring a €390 (440 USD) penalty.17 The nature of these measures means the policing effort is focusing on the surveillance of public spaces, with drones,18 scan-vehicles,19 and cameras.20 Municipalities are also using technology to facilitate citizen reports on violations of the social-distancing measures.21 Contact tracing Finally, the Dutch government’s efforts in developing a contact-tracing app through a rushed tender process and two-day ‘appathon’ (live-streamed on YouTube) have been widely deemed unsuccessful. An unfeasible timeline, and a lack of transparency, led to experts distancing themselves from the appathon.22 Serious concerns about the procedure were raised by members of parliament, civil Dispatches