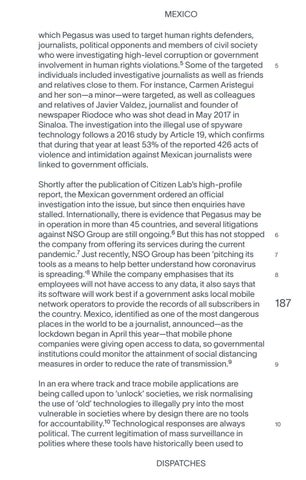 MEXICO which Pegasus was used to target human rights defenders, journalists, political opponents and members of civil society who were investigating high-level corruption or government involvement in human rights violations.5 Some of the targeted individuals included investigative journalists as well as friends and relatives close to them. For instance, Carmen Aristegui and her son—a minor—were targeted, as well as colleagues and relatives of Javier Valdez, journalist and founder of newspaper Riodoce who was shot dead in May 2017 in Sinaloa. The investigation into the illegal use of spyware technology follows a 2016 study by Article 19, which confirms that during that year at least 53% of the reported 426 acts of violence and intimidation against Mexican journalists were linked to government officials. Shortly after the publication of Citizen Lab’s high-profile report, the Mexican government ordered an official investigation into the issue, but since then enquiries have stalled. Internationally, there is evidence that Pegasus may be in operation in more than 45 countries, and several litigations against NSO Group are still ongoing.6 But this has not stopped the company from offering its services during the current pandemic.7 Just recently, NSO Group has been ‘pitching its tools as a means to help better understand how coronavirus is spreading.’8 While the company emphasises that its employees will not have access to any data, it also says that its software will work best if a government asks local mobile network operators to provide the records of all subscribers in the country. Mexico, identified as one of the most dangerous places in the world to be a journalist, announced—as the lockdown began in April this year—that mobile phone companies were giving open access to data, so governmental institutions could monitor the attainment of social distancing measures in order to reduce the rate of transmission.9 In an era where track and trace mobile applications are being called upon to ‘unlock’ societies, we risk normalising the use of ‘old’ technologies to illegally pry into the most vulnerable in societies where by design there are no tools for accountability.10 Technological responses are always political. The current legitimation of mass surveillance in polities where these tools have historically been used to Dispatches