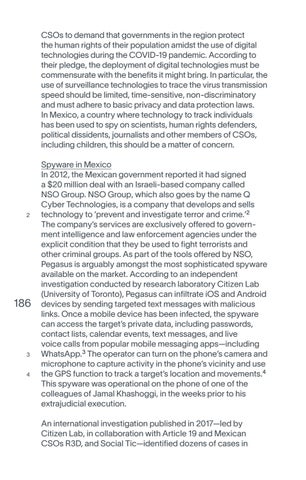 CSOs to demand that governments in the region protect the human rights of their population amidst the use of digital technologies during the COVID-19 pandemic. According to their pledge, the deployment of digital technologies must be commensurate with the benefits it might bring. In particular, the use of surveillance technologies to trace the virus transmission speed should be limited, time-sensitive, non-discriminatory and must adhere to basic privacy and data protection laws. In Mexico, a country where technology to track individuals has been used to spy on scientists, human rights defenders, political dissidents, journalists and other members of CSOs, including children, this should be a matter of concern.

Spyware in Mexico In 2012, the Mexican government reported it had signed a $20 million deal with an Israeli-based company called NSO Group. NSO Group, which also goes by the name Q Cyber Technologies, is a company that develops and sells technology to ‘prevent and investigate terror and crime.’2 The company’s services are exclusively offered to government intelligence and law enforcement agencies under the explicit condition that they be used to fight terrorists and other criminal groups. As part of the tools offered by NSO, Pegasus is arguably amongst the most sophisticated spyware available on the market. According to an independent investigation conducted by research laboratory Citizen Lab (University of Toronto), Pegasus can infiltrate iOS and Android devices by sending targeted text messages with malicious links. Once a mobile device has been infected, the spyware can access the target’s private data, including passwords, contact lists, calendar events, text messages, and live voice calls from popular mobile messaging apps—including WhatsApp.3 The operator can turn on the phone’s camera and microphone to capture activity in the phone’s vicinity and use the GPS function to track a target’s location and movements.4 This spyware was operational on the phone of one of the colleagues of Jamal Khashoggi, in the weeks prior to his extrajudicial execution. An international investigation published in 2017—led by Citizen Lab, in collaboration with Article 19 and Mexican CSOs R3D, and Social Tic—identified dozens of cases in