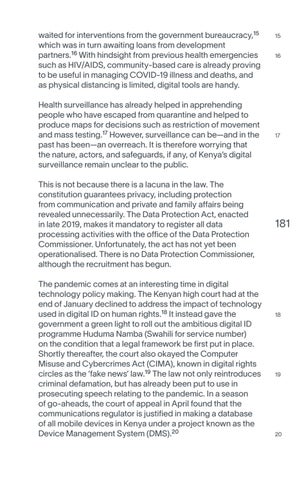 waited for interventions from the government bureaucracy,15 which was in turn awaiting loans from development partners.16 With hindsight from previous health emergencies such as HIV/AIDS, community-based care is already proving to be useful in managing COVID-19 illness and deaths, and as physical distancing is limited, digital tools are handy.

Health surveillance has already helped in apprehending people who have escaped from quarantine and helped to produce maps for decisions such as restriction of movement and mass testing.17 However, surveillance can be—and in the past has been—an overreach. It is therefore worrying that the nature, actors, and safeguards, if any, of Kenya’s digital surveillance remain unclear to the public.

The pandemic comes at an interesting time in digital technology policy making. The Kenyan high court had at the end of January declined to address the impact of technology used in digital ID on human rights.18 It instead gave the government a green light to roll out the ambitious digital ID programme Huduma Namba (Swahili for service number) on the condition that a legal framework be first put in place. Shortly thereafter, the court also okayed the Computer Misuse and Cybercrimes Act (CIMA), known in digital rights circles as the ‘fake news’ law.19 The law not only reintroduces criminal defamation, but has already been put to use in prosecuting speech relating to the pandemic. In a season of go-aheads, the court of appeal in April found that the communications regulator is justified in making a database of all mobile devices in Kenya under a project known as the Device Management System (DMS).20