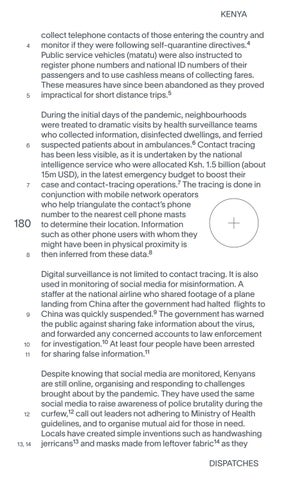 collect telephone contacts of those entering the country and monitor if they were following self-quarantine directives.4 Public service vehicles (matatu) were also instructed to register phone numbers and national ID numbers of their passengers and to use cashless means of collecting fares. These measures have since been abandoned as they proved impractical for short distance trips.5 During the initial days of the pandemic, neighbourhoods were treated to dramatic visits by health surveillance teams who collected information, disinfected dwellings, and ferried suspected patients about in ambulances.6 Contact tracing has been less visible, as it is undertaken by the national intelligence service who were allocated Ksh. 1.5 billion (about 15m USD), in the latest emergency budget to boost their case and contact-tracing operations.7 The tracing is done in conjunction with mobile network operators who help triangulate the contactâ&#x20AC;&#x2122;s phone number to the nearest cell phone masts to determine their location. Information such as other phone users with whom they might have been in physical proximity is then inferred from these data.8 Digital surveillance is not limited to contact tracing. It is also used in monitoring of social media for misinformation. A staffer at the national airline who shared footage of a plane landing from China after the government had halted flights to China was quickly suspended.9 The government has warned the public against sharing fake information about the virus, and forwarded any concerned accounts to law enforcement for investigation.10 At least four people have been arrested for sharing false information.11 Despite knowing that social media are monitored, Kenyans are still online, organising and responding to challenges brought about by the pandemic. They have used the same social media to raise awareness of police brutality during the curfew,12 call out leaders not adhering to Ministry of Health guidelines, and to organise mutual aid for those in need. Locals have created simple inventions such as handwashing jerricans13 and masks made from leftover fabric14 as they Dispatches