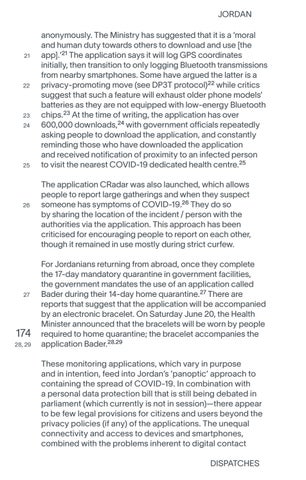 anonymously. The Ministry has suggested that it is a ‘moral and human duty towards others to download and use [the app].’21 The application says it will log GPS coordinates initially, then transition to only logging Bluetooth transmissions from nearby smartphones. Some have argued the latter is a privacy-promoting move (see DP3T protocol)22 while critics suggest that such a feature will exhaust older phone models’ batteries as they are not equipped with low-energy Bluetooth chips.23 At the time of writing, the application has over 600,000 downloads,24 with government officials repeatedly asking people to download the application, and constantly reminding those who have downloaded the application and received notification of proximity to an infected person to visit the nearest COVID-19 dedicated health centre.25 The application CRadar was also launched, which allows people to report large gatherings and when they suspect someone has symptoms of COVID-19.26 They do so by sharing the location of the incident / person with the authorities via the application. This approach has been criticised for encouraging people to report on each other, though it remained in use mostly during strict curfew. For Jordanians returning from abroad, once they complete the 17-day mandatory quarantine in government facilities, the government mandates the use of an application called Bader during their 14-day home quarantine.27 There are reports that suggest that the application will be accompanied by an electronic bracelet. On Saturday June 20, the Health Minister announced that the bracelets will be worn by people required to home quarantine; the bracelet accompanies the application Bader.28,29 These monitoring applications, which vary in purpose and in intention, feed into Jordan’s ‘panoptic’ approach to containing the spread of COVID-19. In combination with a personal data protection bill that is still being debated in parliament (which currently is not in session)—there appear to be few legal provisions for citizens and users beyond the privacy policies (if any) of the applications. The unequal connectivity and access to devices and smartphones, combined with the problems inherent to digital contact Dispatches