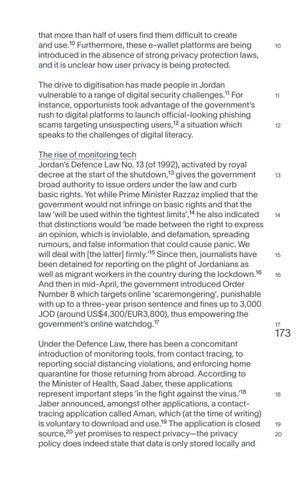 that more than half of users find them difficult to create and use.10 Furthermore, these e-wallet platforms are being introduced in the absence of strong privacy protection laws, and it is unclear how user privacy is being protected. The drive to digitisation has made people in Jordan vulnerable to a range of digital security challenges.11 For instance, opportunists took advantage of the government’s rush to digital platforms to launch official-looking phishing scams targeting unsuspecting users,12 a situation which speaks to the challenges of digital literacy. The rise of monitoring tech Jordan’s Defence Law No. 13 (of 1992), activated by royal decree at the start of the shutdown,13 gives the government broad authority to issue orders under the law and curb basic rights. Yet while Prime Minister Razzaz implied that the government would not infringe on basic rights and that the law ‘will be used within the tightest limits’,14 he also indicated that distinctions would ‘be made between the right to express an opinion, which is inviolable, and defamation, spreading rumours, and false information that could cause panic. We will deal with [the latter] firmly.’15 Since then, journalists have been detained for reporting on the plight of Jordanians as well as migrant workers in the country during the lockdown.16 And then in mid-April, the government introduced Order Number 8 which targets online ‘scaremongering’, punishable with up to a three-year prison sentence and fines up to 3,000 JOD (around US$4,300/EUR3,800), thus empowering the government’s online watchdog.17 Under the Defence Law, there has been a concomitant introduction of monitoring tools, from contact tracing, to reporting social distancing violations, and enforcing home quarantine for those returning from abroad. According to the Minister of Health, Saad Jaber, these applications represent important steps ‘in the fight against the virus.’18 Jaber announced, amongst other applications, a contacttracing application called Aman, which (at the time of writing) is voluntary to download and use.19 The application is closed source,20 yet promises to respect privacy—the privacy policy does indeed state that data is only stored locally and