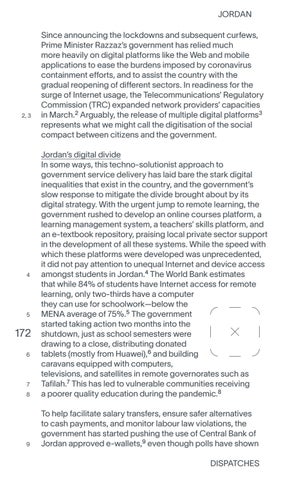 Since announcing the lockdowns and subsequent curfews, Prime Minister Razzaz’s government has relied much more heavily on digital platforms like the Web and mobile applications to ease the burdens imposed by coronavirus containment efforts, and to assist the country with the gradual reopening of different sectors. In readiness for the surge of Internet usage, the Telecommunications’ Regulatory Commission (TRC) expanded network providers’ capacities in March.2 Arguably, the release of multiple digital platforms3 represents what we might call the digitisation of the social compact between citizens and the government.

Jordan’s digital divide In some ways, this techno-solutionist approach to government service delivery has laid bare the stark digital inequalities that exist in the country, and the government’s slow response to mitigate the divide brought about by its digital strategy. With the urgent jump to remote learning, the government rushed to develop an online courses platform, a learning management system, a teachers’ skills platform, and an e-textbook repository, praising local private sector support in the development of all these systems. While the speed with which these platforms were developed was unprecedented, it did not pay attention to unequal Internet and device access amongst students in Jordan.4 The World Bank estimates that while 84% of students have Internet access for remote learning, only two-thirds have a computer they can use for schoolwork—below the MENA average of 75%.5 The government started taking action two months into the shutdown, just as school semesters were drawing to a close, distributing donated tablets (mostly from Huawei),6 and building caravans equipped with computers, televisions, and satellites in remote governorates such as Tafilah.7 This has led to vulnerable communities receiving a poorer quality education during the pandemic.8

To help facilitate salary transfers, ensure safer alternatives to cash payments, and monitor labour law violations, the government has started pushing the use of Central Bank of Jordan approved e-wallets,9 even though polls have shown