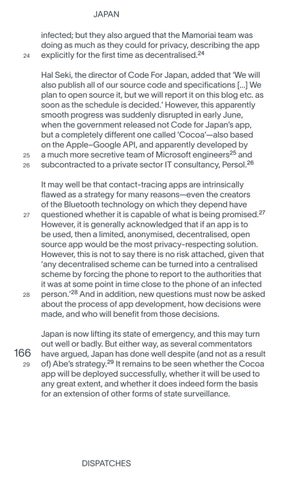 infected; but they also argued that the Mamoriai team was doing as much as they could for privacy, describing the app explicitly for the first time as decentralised.24 Hal Seki, the director of Code For Japan, added that ‘We will also publish all of our source code and specifications [...] We plan to open source it, but we will report it on this blog etc. as soon as the schedule is decided.’ However, this apparently smooth progress was suddenly disrupted in early June, when the government released not Code for Japan’s app, but a completely different one called ‘Cocoa’—also based on the Apple–Google API, and apparently developed by a much more secretive team of Microsoft engineers25 and subcontracted to a private sector IT consultancy, Persol.26 It may well be that contact-tracing apps are intrinsically flawed as a strategy for many reasons—even the creators of the Bluetooth technology on which they depend have questioned whether it is capable of what is being promised.27 However, it is generally acknowledged that if an app is to be used, then a limited, anonymised, decentralised, open source app would be the most privacy-respecting solution. However, this is not to say there is no risk attached, given that ‘any decentralised scheme can be turned into a centralised scheme by forcing the phone to report to the authorities that it was at some point in time close to the phone of an infected person.’28 And in addition, new questions must now be asked about the process of app development, how decisions were made, and who will benefit from those decisions. Japan is now lifting its state of emergency, and this may turn out well or badly. But either way, as several commentators have argued, Japan has done well despite (and not as a result of) Abe’s strategy.29 It remains to be seen whether the Cocoa app will be deployed successfully, whether it will be used to any great extent, and whether it does indeed form the basis for an extension of other forms of state surveillance.