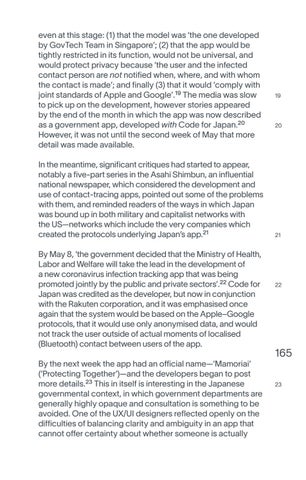 even at this stage: (1) that the model was ‘the one developed by GovTech Team in Singapore’; (2) that the app would be tightly restricted in its function, would not be universal, and would protect privacy because ‘the user and the infected contact person are not notified when, where, and with whom the contact is made’; and finally (3) that it would ‘comply with joint standards of Apple and Google’.19 The media was slow to pick up on the development, however stories appeared by the end of the month in which the app was now described as a government app, developed with Code for Japan.20 However, it was not until the second week of May that more detail was made available. In the meantime, significant critiques had started to appear, notably a five-part series in the Asahi Shimbun, an influential national newspaper, which considered the development and use of contact-tracing apps, pointed out some of the problems with them, and reminded readers of the ways in which Japan was bound up in both military and capitalist networks with the US—networks which include the very companies which created the protocols underlying Japan’s app.21 By May 8, ‘the government decided that the Ministry of Health, Labor and Welfare will take the lead in the development of a new coronavirus infection tracking app that was being promoted jointly by the public and private sectors’.22 Code for Japan was credited as the developer, but now in conjunction with the Rakuten corporation, and it was emphasised once again that the system would be based on the Apple–Google protocols, that it would use only anonymised data, and would not track the user outside of actual moments of localised (Bluetooth) contact between users of the app. By the next week the app had an official name—‘Mamoriai’ (‘Protecting Together’)—and the developers began to post more details.23 This in itself is interesting in the Japanese governmental context, in which government departments are generally highly opaque and consultation is something to be avoided. One of the UX/UI designers reflected openly on the difficulties of balancing clarity and ambiguity in an app that cannot offer certainty about whether someone is actually