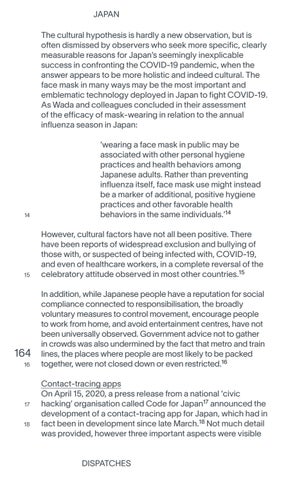 JAPAN The cultural hypothesis is hardly a new observation, but is often dismissed by observers who seek more specific, clearly measurable reasons for Japan’s seemingly inexplicable success in confronting the COVID-19 pandemic, when the answer appears to be more holistic and indeed cultural. The face mask in many ways may be the most important and emblematic technology deployed in Japan to fight COVID-19. As Wada and colleagues concluded in their assessment of the efficacy of mask-wearing in relation to the annual influenza season in Japan:

‘wearing a face mask in public may be associated with other personal hygiene practices and health behaviors among Japanese adults. Rather than preventing influenza itself, face mask use might instead be a marker of additional, positive hygiene practices and other favorable health behaviors in the same individuals.’14 However, cultural factors have not all been positive. There have been reports of widespread exclusion and bullying of those with, or suspected of being infected with, COVID-19, and even of healthcare workers, in a complete reversal of the celebratory attitude observed in most other countries.15 In addition, while Japanese people have a reputation for social compliance connected to responsibilisation, the broadly voluntary measures to control movement, encourage people to work from home, and avoid entertainment centres, have not been universally observed. Government advice not to gather in crowds was also undermined by the fact that metro and train lines, the places where people are most likely to be packed together, were not closed down or even restricted.16 Contact-tracing apps On April 15, 2020, a press release from a national ‘civic hacking’ organisation called Code for Japan17 announced the development of a contact-tracing app for Japan, which had in fact been in development since late March.18 Not much detail was provided, however three important aspects were visible Dispatches