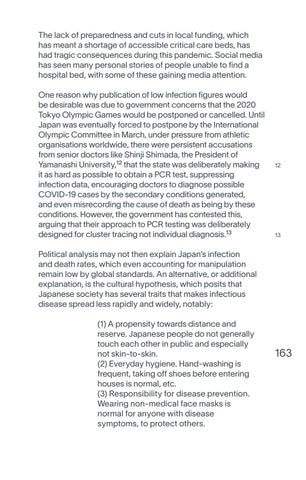 The lack of preparedness and cuts in local funding, which has meant a shortage of accessible critical care beds, has had tragic consequences during this pandemic. Social media has seen many personal stories of people unable to find a hospital bed, with some of these gaining media attention. One reason why publication of low infection figures would be desirable was due to government concerns that the 2020 Tokyo Olympic Games would be postponed or cancelled. Until Japan was eventually forced to postpone by the International Olympic Committee in March, under pressure from athletic organisations worldwide, there were persistent accusations from senior doctors like Shinji Shimada, the President of Yamanashi University,12 that the state was deliberately making it as hard as possible to obtain a PCR test, suppressing infection data, encouraging doctors to diagnose possible COVID-19 cases by the secondary conditions generated, and even misrecording the cause of death as being by these conditions. However, the government has contested this, arguing that their approach to PCR testing was deliberately designed for cluster tracing not individual diagnosis.13

Political analysis may not then explain Japanâ&#x20AC;&#x2122;s infection and death rates, which even accounting for manipulation remain low by global standards. An alternative, or additional explanation, is the cultural hypothesis, which posits that Japanese society has several traits that makes infectious disease spread less rapidly and widely, notably: (1) A propensity towards distance and reserve. Japanese people do not generally touch each other in public and especially not skin-to-skin. (2) Everyday hygiene. Hand-washing is frequent, taking off shoes before entering houses is normal, etc. (3) Responsibility for disease prevention. Wearing non-medical face masks is normal for anyone with disease symptoms, to protect others.