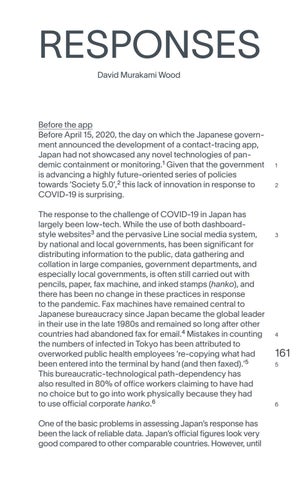 Before the app Before April 15, 2020, the day on which the Japanese government announced the development of a contact-tracing app, Japan had not showcased any novel technologies of pandemic containment or monitoring.1 Given that the government is advancing a highly future-oriented series of policies towards ‘Society 5.0’,2 this lack of innovation in response to COVID-19 is surprising. The response to the challenge of COVID-19 in Japan has largely been low-tech. While the use of both dashboardstyle websites3 and the pervasive Line social media system, by national and local governments, has been significant for distributing information to the public, data gathering and collation in large companies, government departments, and especially local governments, is often still carried out with pencils, paper, fax machine, and inked stamps (hanko), and there has been no change in these practices in response to the pandemic. Fax machines have remained central to Japanese bureaucracy since Japan became the global leader in their use in the late 1980s and remained so long after other countries had abandoned fax for email.4 Mistakes in counting the numbers of infected in Tokyo has been attributed to overworked public health employees ‘re-copying what had been entered into the terminal by hand (and then faxed).’5 This bureaucratic-technological path-dependency has also resulted in 80% of office workers claiming to have had no choice but to go into work physically because they had to use official corporate hanko.6 One of the basic problems in assessing Japan’s response has been the lack of reliable data. Japan’s official figures look very good compared to other comparable countries. However, until