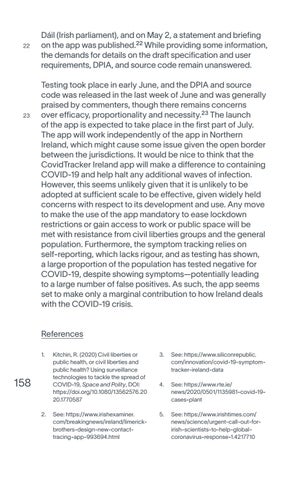 DĂĄil (Irish parliament), and on May 2, a statement and briefing on the app was published.22 While providing some information, the demands for details on the draft specification and user requirements, DPIA, and source code remain unanswered. Testing took place in early June, and the DPIA and source code was released in the last week of June and was generally praised by commenters, though there remains concerns over efficacy, proportionality and necessity.23 The launch of the app is expected to take place in the first part of July. The app will work independently of the app in Northern Ireland, which might cause some issue given the open border between the jurisdictions. It would be nice to think that the CovidTracker Ireland app will make a difference to containing COVID-19 and help halt any additional waves of infection. However, this seems unlikely given that it is unlikely to be adopted at sufficient scale to be effective, given widely held concerns with respect to its development and use. Any move to make the use of the app mandatory to ease lockdown restrictions or gain access to work or public space will be met with resistance from civil liberties groups and the general population. Furthermore, the symptom tracking relies on self-reporting, which lacks rigour, and as testing has shown, a large proportion of the population has tested negative for COVID-19, despite showing symptomsâ&#x20AC;&#x201D;potentially leading to a large number of false positives. As such, the app seems set to make only a marginal contribution to how Ireland deals with the COVID-19 crisis. References 1.