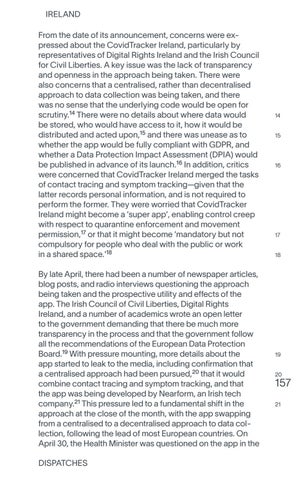 IRELAND From the date of its announcement, concerns were expressed about the CovidTracker Ireland, particularly by representatives of Digital Rights Ireland and the Irish Council for Civil Liberties. A key issue was the lack of transparency and openness in the approach being taken. There were also concerns that a centralised, rather than decentralised approach to data collection was being taken, and there was no sense that the underlying code would be open for scrutiny.14 There were no details about where data would be stored, who would have access to it, how it would be distributed and acted upon,15 and there was unease as to whether the app would be fully compliant with GDPR, and whether a Data Protection Impact Assessment (DPIA) would be published in advance of its launch.16 In addition, critics were concerned that CovidTracker Ireland merged the tasks of contact tracing and symptom tracking—given that the latter records personal information, and is not required to perform the former. They were worried that CovidTracker Ireland might become a ‘super app’, enabling control creep with respect to quarantine enforcement and movement permission,17 or that it might become ‘mandatory but not compulsory for people who deal with the public or work in a shared space.’18 By late April, there had been a number of newspaper articles, blog posts, and radio interviews questioning the approach being taken and the prospective utility and effects of the app. The Irish Council of Civil Liberties, Digital Rights Ireland, and a number of academics wrote an open letter to the government demanding that there be much more transparency in the process and that the government follow all the recommendations of the European Data Protection Board.19 With pressure mounting, more details about the app started to leak to the media, including confirmation that a centralised approach had been pursued,20 that it would combine contact tracing and symptom tracking, and that the app was being developed by Nearform, an Irish tech company.21 This pressure led to a fundamental shift in the approach at the close of the month, with the app swapping from a centralised to a decentralised approach to data collection, following the lead of most European countries. On April 30, the Health Minister was questioned on the app in the Dispatches