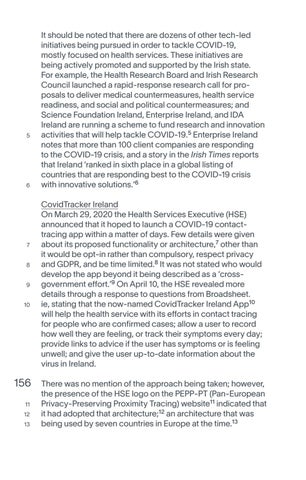 It should be noted that there are dozens of other tech-led initiatives being pursued in order to tackle COVID-19, mostly focused on health services. These initiatives are being actively promoted and supported by the Irish state. For example, the Health Research Board and Irish Research Council launched a rapid-response research call for proposals to deliver medical countermeasures, health service readiness, and social and political countermeasures; and Science Foundation Ireland, Enterprise Ireland, and IDA Ireland are running a scheme to fund research and innovation activities that will help tackle COVID-19.5 Enterprise Ireland notes that more than 100 client companies are responding to the COVID-19 crisis, and a story in the Irish Times reports that Ireland ‘ranked in sixth place in a global listing of countries that are responding best to the COVID-19 crisis with innovative solutions.’6 CovidTracker Ireland On March 29, 2020 the Health Services Executive (HSE) announced that it hoped to launch a COVID-19 contacttracing app within a matter of days. Few details were given about its proposed functionality or architecture,7 other than it would be opt-in rather than compulsory, respect privacy and GDPR, and be time limited.8 It was not stated who would develop the app beyond it being described as a ‘crossgovernment effort.’9 On April 10, the HSE revealed more details through a response to questions from Broadsheet. ie, stating that the now-named CovidTracker Ireland App10 will help the health service with its efforts in contact tracing for people who are confirmed cases; allow a user to record how well they are feeling, or track their symptoms every day; provide links to advice if the user has symptoms or is feeling unwell; and give the user up-to-date information about the virus in Ireland. There was no mention of the approach being taken; however, the presence of the HSE logo on the PEPP-PT (Pan-European Privacy-Preserving Proximity Tracing) website11 indicated that it had adopted that architecture;12 an architecture that was being used by seven countries in Europe at the time.13