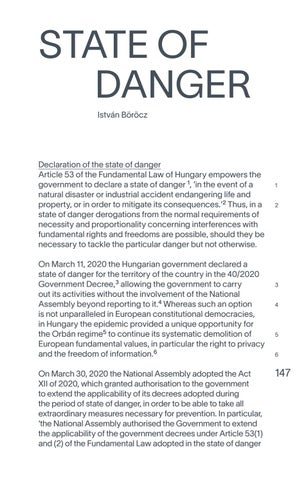 Declaration of the state of danger Article 53 of the Fundamental Law of Hungary empowers the government to declare a state of danger 1, ‘in the event of a natural disaster or industrial accident endangering life and property, or in order to mitigate its consequences.’2 Thus, in a state of danger derogations from the normal requirements of necessity and proportionality concerning interferences with fundamental rights and freedoms are possible, should they be necessary to tackle the particular danger but not otherwise. On March 11, 2020 the Hungarian government declared a state of danger for the territory of the country in the 40/2020 Government Decree,3 allowing the government to carry out its activities without the involvement of the National Assembly beyond reporting to it.4 Whereas such an option is not unparalleled in European constitutional democracies, in Hungary the epidemic provided a unique opportunity for the Orbán regime5 to continue its systematic demolition of European fundamental values, in particular the right to privacy and the freedom of information.6 On March 30, 2020 the National Assembly adopted the Act XII of 2020, which granted authorisation to the government to extend the applicability of its decrees adopted during the period of state of danger, in order to be able to take all extraordinary measures necessary for prevention. In particular, ‘the National Assembly authorised the Government to extend the applicability of the government decrees under Article 53(1) and (2) of the Fundamental Law adopted in the state of danger