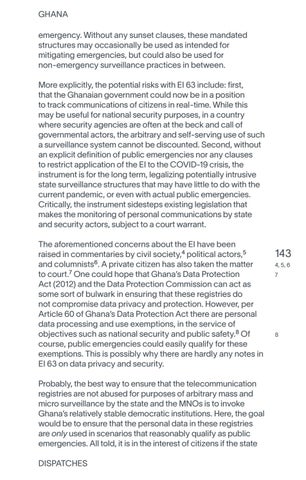 GHANA emergency. Without any sunset clauses, these mandated structures may occasionally be used as intended for mitigating emergencies, but could also be used for non-emergency surveillance practices in between. More explicitly, the potential risks with EI 63 include: first, that the Ghanaian government could now be in a position to track communications of citizens in real-time. While this may be useful for national security purposes, in a country where security agencies are often at the beck and call of governmental actors, the arbitrary and self-serving use of such a surveillance system cannot be discounted. Second, without an explicit definition of public emergencies nor any clauses to restrict application of the EI to the COVID-19 crisis, the instrument is for the long term, legalizing potentially intrusive state surveillance structures that may have little to do with the current pandemic, or even with actual public emergencies. Critically, the instrument sidesteps existing legislation that makes the monitoring of personal communications by state and security actors, subject to a court warrant. The aforementioned concerns about the EI have been raised in commentaries by civil society,4 political actors,5 and columnists6. A private citizen has also taken the matter to court.7 One could hope that Ghanaâ&#x20AC;&#x2122;s Data Protection Act (2012) and the Data Protection Commission can act as some sort of bulwark in ensuring that these registries do not compromise data privacy and protection. However, per Article 60 of Ghanaâ&#x20AC;&#x2122;s Data Protection Act there are personal data processing and use exemptions, in the service of objectives such as national security and public safety.8 Of course, public emergencies could easily qualify for these exemptions. This is possibly why there are hardly any notes in EI 63 on data privacy and security. Probably, the best way to ensure that the telecommunication registries are not abused for purposes of arbitrary mass and micro surveillance by the state and the MNOs is to invoke Ghanaâ&#x20AC;&#x2122;s relatively stable democratic institutions. Here, the goal would be to ensure that the personal data in these registries are only used in scenarios that reasonably qualify as public emergencies. All told, it is in the interest of citizens if the state Dispatches