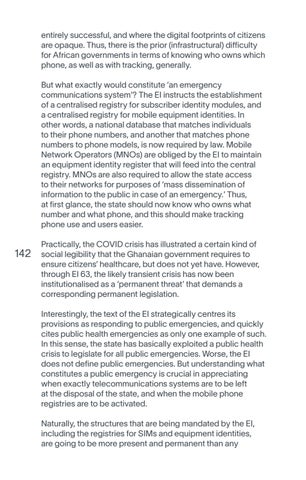 entirely successful, and where the digital footprints of citizens are opaque. Thus, there is the prior (infrastructural) difficulty for African governments in terms of knowing who owns which phone, as well as with tracking, generally. But what exactly would constitute ‘an emergency communications system’? The EI instructs the establishment of a centralised registry for subscriber identity modules, and a centralised registry for mobile equipment identities. In other words, a national database that matches individuals to their phone numbers, and another that matches phone numbers to phone models, is now required by law. Mobile Network Operators (MNOs) are obliged by the EI to maintain an equipment identity register that will feed into the central registry. MNOs are also required to allow the state access to their networks for purposes of ‘mass dissemination of information to the public in case of an emergency.’ Thus, at first glance, the state should now know who owns what number and what phone, and this should make tracking phone use and users easier.

Practically, the COVID crisis has illustrated a certain kind of social legibility that the Ghanaian government requires to ensure citizens’ healthcare, but does not yet have. However, through EI 63, the likely transient crisis has now been institutionalised as a ‘permanent threat’ that demands a corresponding permanent legislation. Interestingly, the text of the EI strategically centres its provisions as responding to public emergencies, and quickly cites public health emergencies as only one example of such. In this sense, the state has basically exploited a public health crisis to legislate for all public emergencies. Worse, the EI does not define public emergencies. But understanding what constitutes a public emergency is crucial in appreciating when exactly telecommunications systems are to be left at the disposal of the state, and when the mobile phone registries are to be activated. Naturally, the structures that are being mandated by the EI, including the registries for SIMs and equipment identities, are going to be more present and permanent than any