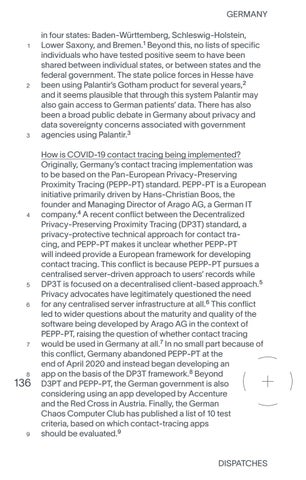 in four states: Baden-Württemberg, Schleswig-Holstein, Lower Saxony, and Bremen.1 Beyond this, no lists of specific individuals who have tested positive seem to have been shared between individual states, or between states and the federal government. The state police forces in Hesse have been using Palantir’s Gotham product for several years,2 and it seems plausible that through this system Palantir may also gain access to German patients’ data. There has also been a broad public debate in Germany about privacy and data sovereignty concerns associated with government agencies using Palantir.3 How is COVID-19 contact tracing being implemented? Originally, Germany’s contact tracing implementation was to be based on the Pan-European Privacy-Preserving Proximity Tracing (PEPP-PT) standard. PEPP-PT is a European initiative primarily driven by Hans-Christian Boos, the founder and Managing Director of Arago AG, a German IT company.4 A recent conflict between the Decentralized Privacy-Preserving Proximity Tracing (DP3T) standard, a privacy-protective technical approach for contact tracing, and PEPP-PT makes it unclear whether PEPP-PT will indeed provide a European framework for developing contact tracing. This conflict is because PEPP-PT pursues a centralised server-driven approach to users’ records while DP3T is focused on a decentralised client-based approach.5 Privacy advocates have legitimately questioned the need for any centralised server infrastructure at all.6 This conflict led to wider questions about the maturity and quality of the software being developed by Arago AG in the context of PEPP-PT, raising the question of whether contact tracing would be used in Germany at all.7 In no small part because of this conflict, Germany abandoned PEPP-PT at the end of April 2020 and instead began developing an app on the basis of the DP3T framework.8 Beyond D3PT and PEPP-PT, the German government is also considering using an app developed by Accenture and the Red Cross in Austria. Finally, the German Chaos Computer Club has published a list of 10 test criteria, based on which contact-tracing apps should be evaluated.9 Dispatches