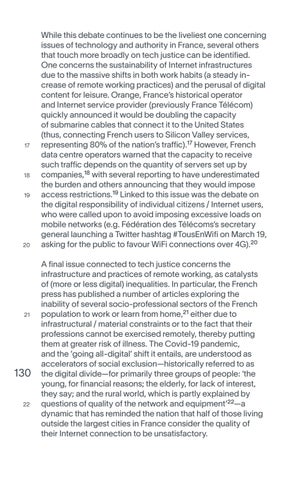 While this debate continues to be the liveliest one concerning issues of technology and authority in France, several others that touch more broadly on tech justice can be identified. One concerns the sustainability of Internet infrastructures due to the massive shifts in both work habits (a steady increase of remote working practices) and the perusal of digital content for leisure. Orange, France’s historical operator and Internet service provider (previously France Télécom) quickly announced it would be doubling the capacity of submarine cables that connect it to the United States (thus, connecting French users to Silicon Valley services, representing 80% of the nation’s traffic).17 However, French data centre operators warned that the capacity to receive such traffic depends on the quantity of servers set up by companies,18 with several reporting to have underestimated the burden and others announcing that they would impose access restrictions.19 Linked to this issue was the debate on the digital responsibility of individual citizens / Internet users, who were called upon to avoid imposing excessive loads on mobile networks (e.g. Fédération des Télécoms’s secretary general launching a Twitter hashtag #TousEnWifi on March 19, asking for the public to favour WiFi connections over 4G).20 A final issue connected to tech justice concerns the infrastructure and practices of remote working, as catalysts of (more or less digital) inequalities. In particular, the French press has published a number of articles exploring the inability of several socio-professional sectors of the French population to work or learn from home,21 either due to infrastructural / material constraints or to the fact that their professions cannot be exercised remotely, thereby putting them at greater risk of illness. The Covid-19 pandemic, and the ‘going all-digital’ shift it entails, are understood as accelerators of social exclusion—historically referred to as the digital divide—for primarily three groups of people: ‘the young, for financial reasons; the elderly, for lack of interest, they say; and the rural world, which is partly explained by questions of quality of the network and equipment’22—a dynamic that has reminded the nation that half of those living outside the largest cities in France consider the quality of their Internet connection to be unsatisfactory.