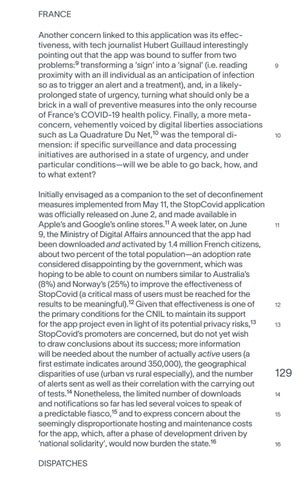 FRANCE Another concern linked to this application was its effectiveness, with tech journalist Hubert Guillaud interestingly pointing out that the app was bound to suffer from two problems:9 transforming a ‘sign’ into a ‘signal’ (i.e. reading proximity with an ill individual as an anticipation of infection so as to trigger an alert and a treatment), and, in a likelyprolonged state of urgency, turning what should only be a brick in a wall of preventive measures into the only recourse of France’s COVID-19 health policy. Finally, a more metaconcern, vehemently voiced by digital liberties associations such as La Quadrature Du Net,10 was the temporal dimension: if specific surveillance and data processing initiatives are authorised in a state of urgency, and under particular conditions—will we be able to go back, how, and to what extent? Initially envisaged as a companion to the set of deconfinement measures implemented from May 11, the StopCovid application was officially released on June 2, and made available in Apple’s and Google’s online stores.11 A week later, on June 9, the Ministry of Digital Affairs announced that the app had been downloaded and activated by 1.4 million French citizens, about two percent of the total population—an adoption rate considered disappointing by the government, which was hoping to be able to count on numbers similar to Australia’s (8%) and Norway’s (25%) to improve the effectiveness of StopCovid (a critical mass of users must be reached for the results to be meaningful).12 Given that effectiveness is one of the primary conditions for the CNIL to maintain its support for the app project even in light of its potential privacy risks,13 StopCovid’s promoters are concerned, but do not yet wish to draw conclusions about its success; more information will be needed about the number of actually active users (a first estimate indicates around 350,000), the geographical disparities of use (urban vs rural especially), and the number of alerts sent as well as their correlation with the carrying out of tests.14 Nonetheless, the limited number of downloads and notifications so far has led several voices to speak of a predictable fiasco,15 and to express concern about the seemingly disproportionate hosting and maintenance costs for the app, which, after a phase of development driven by ‘national solidarity’, would now burden the state.16 Dispatches