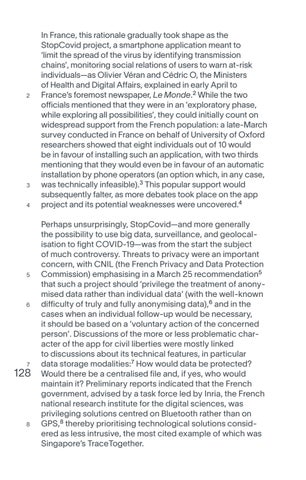 In France, this rationale gradually took shape as the StopCovid project, a smartphone application meant to ‘limit the spread of the virus by identifying transmission chains’, monitoring social relations of users to warn at-risk individuals—as Olivier Véran and Cédric O, the Ministers of Health and Digital Affairs, explained in early April to France’s foremost newspaper, Le Monde.2 While the two officials mentioned that they were in an ‘exploratory phase, while exploring all possibilities’, they could initially count on widespread support from the French population: a late-March survey conducted in France on behalf of University of Oxford researchers showed that eight individuals out of 10 would be in favour of installing such an application, with two thirds mentioning that they would even be in favour of an automatic installation by phone operators (an option which, in any case, was technically infeasible).3 This popular support would subsequently falter, as more debates took place on the app project and its potential weaknesses were uncovered.4 Perhaps unsurprisingly, StopCovid—and more generally the possibility to use big data, surveillance, and geolocalisation to fight COVID-19—was from the start the subject of much controversy. Threats to privacy were an important concern, with CNIL (the French Privacy and Data Protection Commission) emphasising in a March 25 recommendation5 that such a project should ‘privilege the treatment of anonymised data rather than individual data’ (with the well-known difficulty of truly and fully anonymising data),6 and in the cases when an individual follow-up would be necessary, it should be based on a ‘voluntary action of the concerned person’. Discussions of the more or less problematic character of the app for civil liberties were mostly linked to discussions about its technical features, in particular data storage modalities:7 How would data be protected? Would there be a centralised file and, if yes, who would maintain it? Preliminary reports indicated that the French government, advised by a task force led by Inria, the French national research institute for the digital sciences, was privileging solutions centred on Bluetooth rather than on GPS,8 thereby prioritising technological solutions considered as less intrusive, the most cited example of which was Singapore’s TraceTogether.