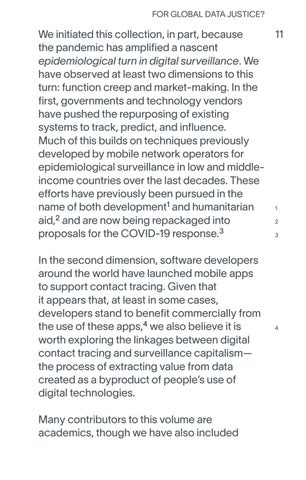 We initiated this collection, in part, because 11 the pandemic has amplified a nascent epidemiological turn in digital surveillance. We have observed at least two dimensions to this turn: function creep and market-making. In the first, governments and technology vendors have pushed the repurposing of existing systems to track, predict, and influence. Much of this builds on techniques previously developed by mobile network operators for epidemiological surveillance in low and middleincome countries over the last decades. These efforts have previously been pursued in the 1 name of both development1 and humanitarian 2 aid,2 and are now being repackaged into 3 proposals for the COVID-19 response.3 In the second dimension, software developers around the world have launched mobile apps to support contact tracing. Given that it appears that, at least in some cases, developers stand to benefit commercially from the use of these apps,4 we also believe it is worth exploring the linkages between digital contact tracing and surveillance capitalismâ&#x20AC;&#x201D; the process of extracting value from data created as a byproduct of peopleâ&#x20AC;&#x2122;s use of digital technologies. Many contributors to this volume are academics, though we have also included