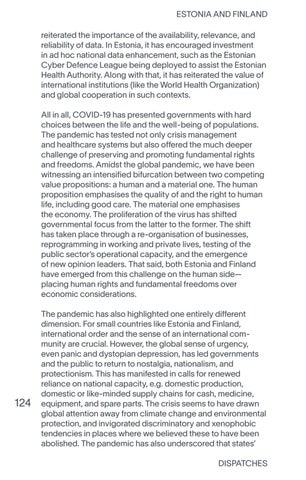 ESTONIA AND FINLAND reiterated the importance of the availability, relevance, and reliability of data. In Estonia, it has encouraged investment in ad hoc national data enhancement, such as the Estonian Cyber Defence League being deployed to assist the Estonian Health Authority. Along with that, it has reiterated the value of international institutions (like the World Health Organization) and global cooperation in such contexts. All in all, COVID-19 has presented governments with hard choices between the life and the well-being of populations. The pandemic has tested not only crisis management and healthcare systems but also offered the much deeper challenge of preserving and promoting fundamental rights and freedoms. Amidst the global pandemic, we have been witnessing an intensified bifurcation between two competing value propositions: a human and a material one. The human proposition emphasises the quality of and the right to human life, including good care. The material one emphasises the economy. The proliferation of the virus has shifted governmental focus from the latter to the former. The shift has taken place through a re-organisation of businesses, reprogramming in working and private lives, testing of the public sectorâ&#x20AC;&#x2122;s operational capacity, and the emergence of new opinion leaders. That said, both Estonia and Finland have emerged from this challenge on the human sideâ&#x20AC;&#x201D; placing human rights and fundamental freedoms over economic considerations.

The pandemic has also highlighted one entirely different dimension. For small countries like Estonia and Finland, international order and the sense of an international community are crucial. However, the global sense of urgency, even panic and dystopian depression, has led governments and the public to return to nostalgia, nationalism, and protectionism. This has manifested in calls for renewed reliance on national capacity, e.g. domestic production, domestic or like-minded supply chains for cash, medicine, equipment, and spare parts. The crisis seems to have drawn global attention away from climate change and environmental protection, and invigorated discriminatory and xenophobic tendencies in places where we believed these to have been abolished. The pandemic has also underscored that statesâ&#x20AC;&#x2122; Dispatches