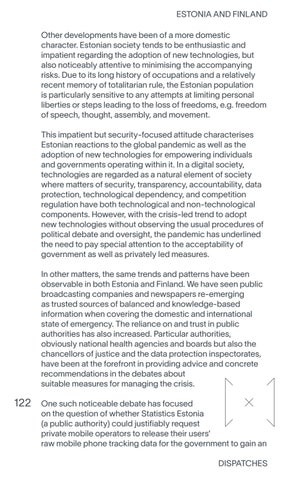 ESTONIA AND FINLAND Other developments have been of a more domestic character. Estonian society tends to be enthusiastic and impatient regarding the adoption of new technologies, but also noticeably attentive to minimising the accompanying risks. Due to its long history of occupations and a relatively recent memory of totalitarian rule, the Estonian population is particularly sensitive to any attempts at limiting personal liberties or steps leading to the loss of freedoms, e.g. freedom of speech, thought, assembly, and movement. This impatient but security-focused attitude characterises Estonian reactions to the global pandemic as well as the adoption of new technologies for empowering individuals and governments operating within it. In a digital society, technologies are regarded as a natural element of society where matters of security, transparency, accountability, data protection, technological dependency, and competition regulation have both technological and non-technological components. However, with the crisis-led trend to adopt new technologies without observing the usual procedures of political debate and oversight, the pandemic has underlined the need to pay special attention to the acceptability of government as well as privately led measures. In other matters, the same trends and patterns have been observable in both Estonia and Finland. We have seen public broadcasting companies and newspapers re-emerging as trusted sources of balanced and knowledge-based information when covering the domestic and international state of emergency. The reliance on and trust in public authorities has also increased. Particular authorities, obviously national health agencies and boards but also the chancellors of justice and the data protection inspectorates, have been at the forefront in providing advice and concrete recommendations in the debates about suitable measures for managing the crisis.

One such noticeable debate has focused on the question of whether Statistics Estonia (a public authority) could justifiably request private mobile operators to release their usersâ&#x20AC;&#x2122; raw mobile phone tracking data for the government to gain an Dispatches