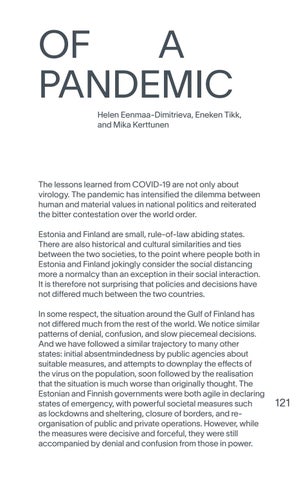 The lessons learned from COVID-19 are not only about virology. The pandemic has intensified the dilemma between human and material values in national politics and reiterated the bitter contestation over the world order. Estonia and Finland are small, rule-of-law abiding states. There are also historical and cultural similarities and ties between the two societies, to the point where people both in Estonia and Finland jokingly consider the social distancing more a normalcy than an exception in their social interaction. It is therefore not surprising that policies and decisions have not differed much between the two countries. In some respect, the situation around the Gulf of Finland has not differed much from the rest of the world. We notice similar patterns of denial, confusion, and slow piecemeal decisions. And we have followed a similar trajectory to many other states: initial absentmindedness by public agencies about suitable measures, and attempts to downplay the effects of the virus on the population, soon followed by the realisation that the situation is much worse than originally thought. The Estonian and Finnish governments were both agile in declaring states of emergency, with powerful societal measures such as lockdowns and sheltering, closure of borders, and reorganisation of public and private operations. However, while the measures were decisive and forceful, they were still accompanied by denial and confusion from those in power.