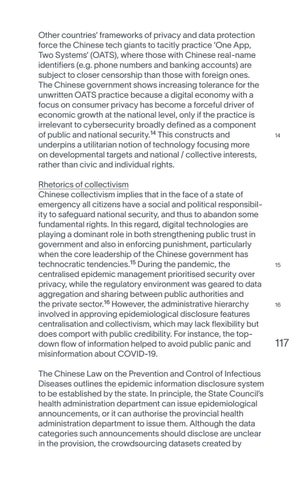 Other countries’ frameworks of privacy and data protection force the Chinese tech giants to tacitly practice ‘One App, Two Systems’ (OATS), where those with Chinese real-name identifiers (e.g. phone numbers and banking accounts) are subject to closer censorship than those with foreign ones. The Chinese government shows increasing tolerance for the unwritten OATS practice because a digital economy with a focus on consumer privacy has become a forceful driver of economic growth at the national level, only if the practice is irrelevant to cybersecurity broadly defined as a component of public and national security.14 This constructs and underpins a utilitarian notion of technology focusing more on developmental targets and national / collective interests, rather than civic and individual rights. Rhetorics of collectivism Chinese collectivism implies that in the face of a state of emergency all citizens have a social and political responsibility to safeguard national security, and thus to abandon some fundamental rights. In this regard, digital technologies are playing a dominant role in both strengthening public trust in government and also in enforcing punishment, particularly when the core leadership of the Chinese government has technocratic tendencies.15 During the pandemic, the centralised epidemic management prioritised security over privacy, while the regulatory environment was geared to data aggregation and sharing between public authorities and the private sector.16 However, the administrative hierarchy involved in approving epidemiological disclosure features centralisation and collectivism, which may lack flexibility but does comport with public credibility. For instance, the topdown flow of information helped to avoid public panic and misinformation about COVID-19. The Chinese Law on the Prevention and Control of Infectious Diseases outlines the epidemic information disclosure system to be established by the state. In principle, the State Council’s health administration department can issue epidemiological announcements, or it can authorise the provincial health administration department to issue them. Although the data categories such announcements should disclose are unclear in the provision, the crowdsourcing datasets created by