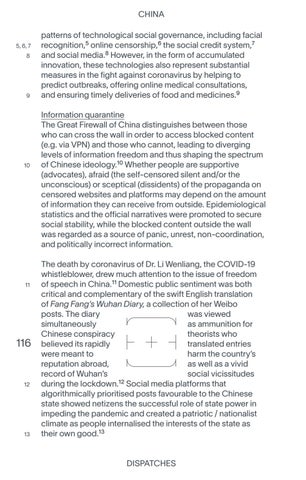 patterns of technological social governance, including facial recognition,5 online censorship,6 the social credit system,7 and social media.8 However, in the form of accumulated innovation, these technologies also represent substantial measures in the fight against coronavirus by helping to predict outbreaks, offering online medical consultations, and ensuring timely deliveries of food and medicines.9 Information quarantine The Great Firewall of China distinguishes between those who can cross the wall in order to access blocked content (e.g. via VPN) and those who cannot, leading to diverging levels of information freedom and thus shaping the spectrum of Chinese ideology.10 Whether people are supportive (advocates), afraid (the self-censored silent and/or the unconscious) or sceptical (dissidents) of the propaganda on censored websites and platforms may depend on the amount of information they can receive from outside. Epidemiological statistics and the official narratives were promoted to secure social stability, while the blocked content outside the wall was regarded as a source of panic, unrest, non-coordination, and politically incorrect information. The death by coronavirus of Dr. Li Wenliang, the COVID-19 whistleblower, drew much attention to the issue of freedom of speech in China.11 Domestic public sentiment was both critical and complementary of the swift English translation of Fang Fang’s Wuhan Diary, a collection of her Weibo posts. The diary was viewed simultaneously as ammunition for Chinese conspiracy theorists who believed its rapidly translated entries were meant to harm the country’s reputation abroad, as well as a vivid record of Wuhan’s social vicissitudes during the lockdown.12 Social media platforms that algorithmically prioritised posts favourable to the Chinese state showed netizens the successful role of state power in impeding the pandemic and created a patriotic / nationalist climate as people internalised the interests of the state as their own good.13 DISPATCHES