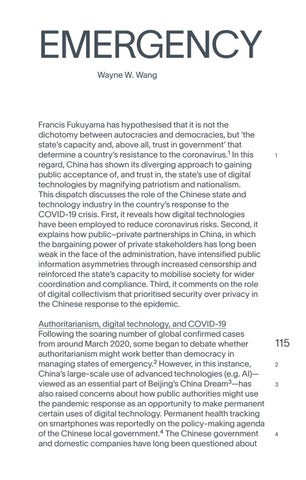 Francis Fukuyama has hypothesised that it is not the dichotomy between autocracies and democracies, but ‘the state’s capacity and, above all, trust in government’ that determine a country’s resistance to the coronavirus.1 In this regard, China has shown its diverging approach to gaining public acceptance of, and trust in, the state’s use of digital technologies by magnifying patriotism and nationalism. This dispatch discusses the role of the Chinese state and technology industry in the country’s response to the COVID-19 crisis. First, it reveals how digital technologies have been employed to reduce coronavirus risks. Second, it explains how public–private partnerships in China, in which the bargaining power of private stakeholders has long been weak in the face of the administration, have intensified public information asymmetries through increased censorship and reinforced the state’s capacity to mobilise society for wider coordination and compliance. Third, it comments on the role of digital collectivism that prioritised security over privacy in the Chinese response to the epidemic. Authoritarianism, digital technology, and COVID-19 Following the soaring number of global confirmed cases from around March 2020, some began to debate whether authoritarianism might work better than democracy in managing states of emergency.2 However, in this instance, China’s large-scale use of advanced technologies (e.g. AI)— viewed as an essential part of Beijing’s China Dream3—has also raised concerns about how public authorities might use the pandemic response as an opportunity to make permanent certain uses of digital technology. Permanent health tracking on smartphones was reportedly on the policy-making agenda of the Chinese local government.4 The Chinese government and domestic companies have long been questioned about