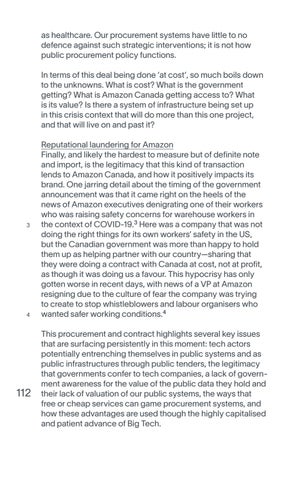 as healthcare. Our procurement systems have little to no defence against such strategic interventions; it is not how public procurement policy functions. In terms of this deal being done ‘at cost’, so much boils down to the unknowns. What is cost? What is the government getting? What is Amazon Canada getting access to? What is its value? Is there a system of infrastructure being set up in this crisis context that will do more than this one project, and that will live on and past it?

Reputational laundering for Amazon Finally, and likely the hardest to measure but of definite note and import, is the legitimacy that this kind of transaction lends to Amazon Canada, and how it positively impacts its brand. One jarring detail about the timing of the government announcement was that it came right on the heels of the news of Amazon executives denigrating one of their workers who was raising safety concerns for warehouse workers in the context of COVID-19.3 Here was a company that was not doing the right things for its own workers’ safety in the US, but the Canadian government was more than happy to hold them up as helping partner with our country—sharing that they were doing a contract with Canada at cost, not at profit, as though it was doing us a favour. This hypocrisy has only gotten worse in recent days, with news of a VP at Amazon resigning due to the culture of fear the company was trying to create to stop whistleblowers and labour organisers who wanted safer working conditions.4 This procurement and contract highlights several key issues that are surfacing persistently in this moment: tech actors potentially entrenching themselves in public systems and as public infrastructures through public tenders, the legitimacy that governments confer to tech companies, a lack of government awareness for the value of the public data they hold and their lack of valuation of our public systems, the ways that free or cheap services can game procurement systems, and how these advantages are used though the highly capitalised and patient advance of Big Tech.