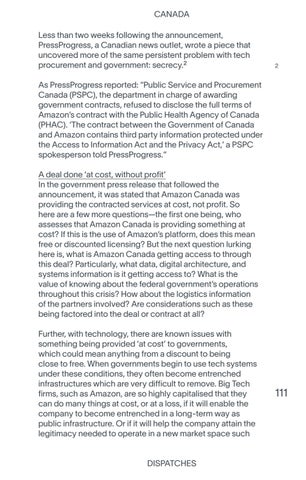 CANADA Less than two weeks following the announcement, PressProgress, a Canadian news outlet, wrote a piece that uncovered more of the same persistent problem with tech procurement and government: secrecy.2

As PressProgress reported: “Public Service and Procurement Canada (PSPC), the department in charge of awarding government contracts, refused to disclose the full terms of Amazon’s contract with the Public Health Agency of Canada (PHAC). ‘The contract between the Government of Canada and Amazon contains third party information protected under the Access to Information Act and the Privacy Act,’ a PSPC spokesperson told PressProgress.” A deal done ‘at cost, without profit’ In the government press release that followed the announcement, it was stated that Amazon Canada was providing the contracted services at cost, not profit. So here are a few more questions—the first one being, who assesses that Amazon Canada is providing something at cost? If this is the use of Amazon’s platform, does this mean free or discounted licensing? But the next question lurking here is, what is Amazon Canada getting access to through this deal? Particularly, what data, digital architecture, and systems information is it getting access to? What is the value of knowing about the federal government’s operations throughout this crisis? How about the logistics information of the partners involved? Are considerations such as these being factored into the deal or contract at all? Further, with technology, there are known issues with something being provided ‘at cost’ to governments, which could mean anything from a discount to being close to free. When governments begin to use tech systems under these conditions, they often become entrenched infrastructures which are very difficult to remove. Big Tech firms, such as Amazon, are so highly capitalised that they can do many things at cost, or at a loss, if it will enable the company to become entrenched in a long-term way as public infrastructure. Or if it will help the company attain the legitimacy needed to operate in a new market space such DISPATCHES