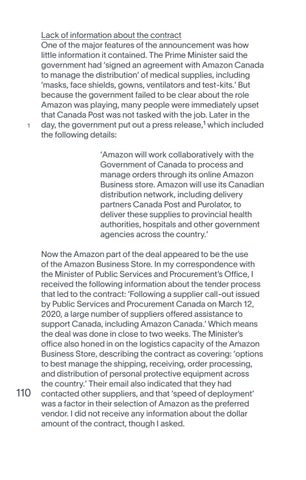 Lack of information about the contract One of the major features of the announcement was how little information it contained. The Prime Minister said the government had ‘signed an agreement with Amazon Canada to manage the distribution’ of medical supplies, including ‘masks, face shields, gowns, ventilators and test-kits.’ But because the government failed to be clear about the role Amazon was playing, many people were immediately upset that Canada Post was not tasked with the job. Later in the day, the government put out a press release,1 which included the following details: ‘Amazon will work collaboratively with the Government of Canada to process and manage orders through its online Amazon Business store. Amazon will use its Canadian distribution network, including delivery partners Canada Post and Purolator, to deliver these supplies to provincial health authorities, hospitals and other government agencies across the country.’

Now the Amazon part of the deal appeared to be the use of the Amazon Business Store. In my correspondence with the Minister of Public Services and Procurement’s Office, I received the following information about the tender process that led to the contract: ‘Following a supplier call-out issued by Public Services and Procurement Canada on March 12, 2020, a large number of suppliers offered assistance to support Canada, including Amazon Canada.’ Which means the deal was done in close to two weeks. The Minister’s office also honed in on the logistics capacity of the Amazon Business Store, describing the contract as covering: ‘options to best manage the shipping, receiving, order processing, and distribution of personal protective equipment across the country.’ Their email also indicated that they had contacted other suppliers, and that ‘speed of deployment’ was a factor in their selection of Amazon as the preferred vendor. I did not receive any information about the dollar amount of the contract, though I asked.