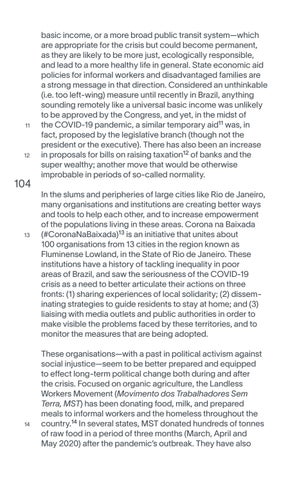 basic income, or a more broad public transit system—which are appropriate for the crisis but could become permanent, as they are likely to be more just, ecologically responsible, and lead to a more healthy life in general. State economic aid policies for informal workers and disadvantaged families are a strong message in that direction. Considered an unthinkable (i.e. too left-wing) measure until recently in Brazil, anything sounding remotely like a universal basic income was unlikely to be approved by the Congress, and yet, in the midst of the COVID-19 pandemic, a similar temporary aid11 was, in fact, proposed by the legislative branch (though not the president or the executive). There has also been an increase in proposals for bills on raising taxation12 of banks and the super wealthy; another move that would be otherwise improbable in periods of so-called normality. In the slums and peripheries of large cities like Rio de Janeiro, many organisations and institutions are creating better ways and tools to help each other, and to increase empowerment of the populations living in these areas. Corona na Baixada (#CoronaNaBaixada)13 is an initiative that unites about 100 organisations from 13 cities in the region known as Fluminense Lowland, in the State of Rio de Janeiro. These institutions have a history of tackling inequality in poor areas of Brazil, and saw the seriousness of the COVID-19 crisis as a need to better articulate their actions on three fronts: (1) sharing experiences of local solidarity; (2) disseminating strategies to guide residents to stay at home; and (3) liaising with media outlets and public authorities in order to make visible the problems faced by these territories, and to monitor the measures that are being adopted. These organisations—with a past in political activism against social injustice—seem to be better prepared and equipped to effect long-term political change both during and after the crisis. Focused on organic agriculture, the Landless Workers Movement (Movimento dos Trabalhadores Sem Terra, MST) has been donating food, milk, and prepared meals to informal workers and the homeless throughout the country.14 In several states, MST donated hundreds of tonnes of raw food in a period of three months (March, April and May 2020) after the pandemic’s outbreak. They have also