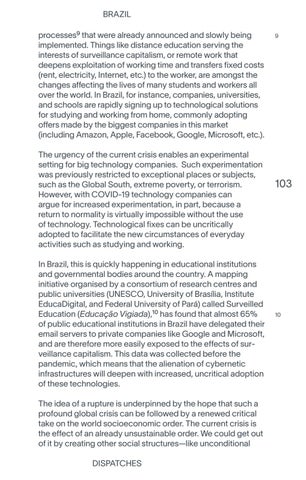 BRAZIL processes9 that were already announced and slowly being implemented. Things like distance education serving the interests of surveillance capitalism, or remote work that deepens exploitation of working time and transfers fixed costs (rent, electricity, Internet, etc.) to the worker, are amongst the changes affecting the lives of many students and workers all over the world. In Brazil, for instance, companies, universities, and schools are rapidly signing up to technological solutions for studying and working from home, commonly adopting offers made by the biggest companies in this market (including Amazon, Apple, Facebook, Google, Microsoft, etc.). The urgency of the current crisis enables an experimental setting for big technology companies. Such experimentation was previously restricted to exceptional places or subjects, such as the Global South, extreme poverty, or terrorism. However, with COVID-19 technology companies can argue for increased experimentation, in part, because a return to normality is virtually impossible without the use of technology. Technological fixes can be uncritically adopted to facilitate the new circumstances of everyday activities such as studying and working. In Brazil, this is quickly happening in educational institutions and governmental bodies around the country. A mapping initiative organised by a consortium of research centres and public universities (UNESCO, University of Brasília, Institute EducaDigital, and Federal University of Pará) called Surveilled Education (Educação Vigiada),10 has found that almost 65% of public educational institutions in Brazil have delegated their email servers to private companies like Google and Microsoft, and are therefore more easily exposed to the effects of surveillance capitalism. This data was collected before the pandemic, which means that the alienation of cybernetic infrastructures will deepen with increased, uncritical adoption of these technologies. The idea of a rupture is underpinned by the hope that such a profound global crisis can be followed by a renewed critical take on the world socioeconomic order. The current crisis is the effect of an already unsustainable order. We could get out of it by creating other social structures—like unconditional DISPATCHES