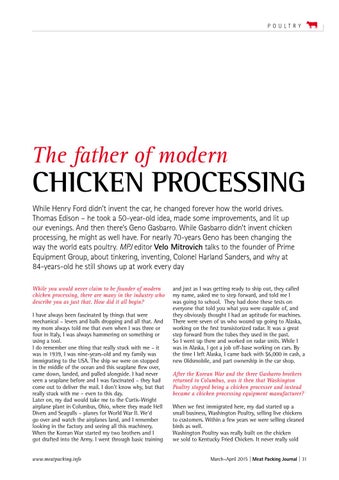 The father of modern

chicken processing While Henry Ford didn’t invent the car, he changed forever how the world drives. Thomas Edison – he took a 50-year-old idea, made some improvements, and lit up our evenings. And then there’s Geno Gasbarro. While Gasbarro didn’t invent chicken processing, he might as well have. For nearly 70-years Geno has been changing the way the world eats poultry. MPJ editor Velo Mitrovich talks to the founder of Prime Equipment Group, about tinkering, inventing, Colonel Harland Sanders, and why at 84-years-old he still shows up at work every day While you would never claim to be founder of modern chicken processing, there are many in the industry who describe you as just that. How did it all begin? I have always been fascinated by things that were mechanical – levers and balls dropping and all that. And my mom always told me that even when I was three or four in Italy, I was always hammering on something or using a tool. I do remember one thing that really stuck with me – it was in 1939, I was nine-years-old and my family was immigrating to the USA. The ship we were on stopped in the middle of the ocean and this seaplane flew over, came down, landed, and pulled alongside. I had never seen a seaplane before and I was fascinated – they had come out to deliver the mail. I don’t know why, but that really stuck with me – even to this day. Later on, my dad would take me to the Curtis-Wright airplane plant in Columbus, Ohio, where they made Hell Divers and Seagulls – planes for World War II. We’d go over and watch the airplanes land, and I remember looking in the factory and seeing all this machinery. When the Korean War started my two brothers and I got drafted into the Army. I went through basic training www.meatpacking.info

and just as I was getting ready to ship out, they called my name, asked me to step forward, and told me I was going to school. They had done these tests on everyone that told you what you were capable of, and they obviously thought I had an aptitude for machines. There were seven of us who wound up going to Alaska, working on the first transistorized radar. It was a great step forward from the tubes they used in the past. So I went up there and worked on radar units. While I was in Alaska, I got a job off-base working on cars. By the time I left Alaska, I came back with $6,000 in cash, a new Oldsmobile, and part ownership in the car shop. After the Korean War and the three Gasbarro brothers returned to Columbus, was it then that Washington Poultry stopped being a chicken processer and instead became a chicken processing equipment manufacturer? When we first immigrated here, my dad started up a small business, Washington Poultry, selling live chickens to customers. Within a few years we were selling cleaned birds as well. Washington Poultry was really built on the chicken we sold to Kentucky Fried Chicken. It never really sold March~April 2015 | Meat Packing Journal | 31

The international magazine for the meat and poultry processing industry