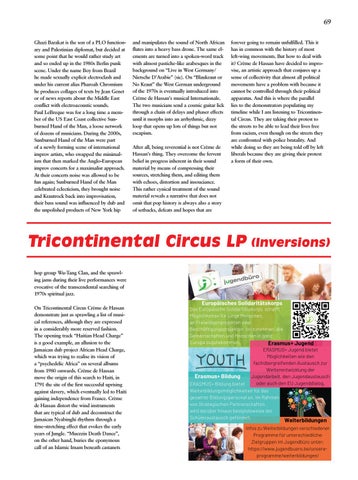 69 Ghazi Barakat is the son of a PLO functionary and Palestinian diplomat, but decided at some point that he would rather study art and so ended up in the 1980s Berlin punk scene. Under the name Boy from Brazil he made sexually explicit electroclash and under his current alias Pharoah Chromium he produces collages of texts by Jean Genet or of news reports about the Middle East conflict with electroacoustic sounds. Paul LeBreque was for a long time a member of the US East Coast collective Sunburned Hand of the Man, a loose network of dozens of musicians. During the 2000s, Sunburned Hand of the Man were part of a newly forming scene of international improv artists, who swapped the minimalism that then marked the Anglo-European improv concerts for a maximalist approach. At their concerts noise was allowed to be fun again; Sunburned Hand of the Man celebrated eclecticism, they brought noise and Krautrock back into improvisation, their bass sound was influenced by dub and the unpolished products of New York hip

and manipulates the sound of North African flutes into a heavy bass drone. The same elements are turned into a spoken-word track with almost pastiche-like arabesques in the background on “Live in West Germany/ Nietsche D’Arabie” (sic). On “Blaukraut or No Kraut” the West German underground of the 1970s is eventually introduced into Crème de Hassan’s musical Internationale. The two musicians send a cosmic guitar lick through a chain of delays and phaser effects until it morphs into an arrhythmic, dizzy loop that opens up lots of things but not escapism. After all, being reverential is not Crème de Hassan’s thing. They overcome the fervent belief in progress inherent in their sound material by means of compressing their sources, stretching them, and editing them with echoes, distortion and insouciance. This rather cynical treatment of the sound material reveals a narrative that does not omit that pop history is always also a story of setbacks, defeats and hopes that are

forever going to remain unfulfilled. This it has in common with the history of most left-wing movements. But how to deal with it? Crème de Hassan have decided to improvise, an artistic approach that conjures up a sense of collectivity that almost all political movements have a problem with because it cannot be controlled through their political apparatus. And this is where the parallel lies to the demonstrators populating my timeline while I am listening to Tricontinental Circus. They are taking their protest to the streets to be able to lead their lives free from racism, even though on the streets they are confronted with police brutality. And while doing so they are being told off by left liberals because they are giving their protest a form of their own.

Tricontinental Circus LP hop group Wu-Tang Clan, and the sprawling jams during their live performances were evocative of the transcendental searching of 1970s spiritual jazz. On Tricontinental Circus Crème de Hassan demonstrate just as sprawling a list of musical references, although they are expressed in a considerably more reserved fashion. The opening track “Haitian Head Charge” is a good example, an allusion to the Jamaican dub project African Head Charge, which was trying to realise its vision of a “psychedelic Africa” on several albums from 1980 onwards. Crème de Hassan move the origin of this search to Haiti, in 1791 the site of the first successful uprising against slavery, which eventually led to Haiti gaining independence from France. Crème de Hassan distort the wind instruments that are typical of dub and deconstruct the Jamaican Nyabinghi rhythms through a time-stretching effect that evokes the early years of Jungle. “Muezzin Death Dance”, on the other hand, buries the eponymous call of an Islamic Imam beneath castanets