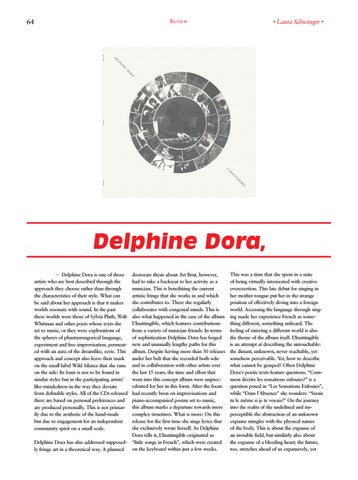 Delphine Dora, doctorate thesis about Art Brut, however, had to take a backseat to her activity as a musician. This is benefitting the current artistic fringe that she works in and which she contributes to. There she regularly collaborates with congenial minds. This is also what happened in the case of the album L’Inattingible, which features contributions from a variety of musician friends. In terms of sophistication Delphine Dora has forged new and unusually lengthy paths for this album. Despite having more than 30 releases under her belt that she recorded both solo and in collaboration with other artists over the last 15 years, the time and effort that went into this concept album were unprecedented for her in this form. After the focus had recently been on improvisations and piano-accompanied poems set to music, this album marks a departure towards more complex structures. What is more: On this release for the first time she sings lyrics that she exclusively wrote herself. As Delphine Dora tells it, L’Inattingible originated as Delphine Dora has also addressed supposed- “little songs in French”, which were created on the keyboard within just a few weeks. ly fringe art in a theoretical way. A planned − Delphine Dora is one of those artists who are best described through the approach they choose rather than through the characteristics of their style. What can be said about her approach is that it makes worlds resonate with sound. In the past these worlds were those of Sylvia Plath, Walt Whitman and other poets whose texts she set to music, or they were explorations of the spheres of phantasmagorical language, experiment and free improvisation, permeated with an aura of the dreamlike, eerie. This approach and concept also leave their mark on the small label Wild Silence that she runs on the side: Its basis is not to be found in similar styles but in the participating artists’ like-mindedness in the way they deviate from definable styles. All of the CDs released there are based on personal preferences and are produced personally. This is not primarily due to the aesthetic of the hand-made but due to engagement for an independent community spirit on a small scale.

This was a time that she spent in a state of being virtually intoxicated with creative overexertion. This late debut for singing in her mother tongue put her in the strange position of effectively diving into a foreign world. Accessing the language through singing made her experience French as something different, something unheard. The feeling of entering a different world is also the theme of the album itself. L’Inattingible is an attempt at describing the untouchable: the distant, unknown, never reachable, yet somehow perceivable. Yet, how to describe what cannot be grasped? Often Delphine Dora’s poetic texts feature questions. “Comment décrire les sensations enfouies?” is a question posed in “Les Sensations Enfouies”, while “Dans l’Absence” she wonders: “Serais tu le même si je te voyais?” On the journey into the realm of the undefined and imperceptible the abstraction of an unknown expanse mingles with the physical nature of the body. This is about the expanse of an invisible field, but similarly also about the expanse of a bleeding heart; the future, too, stretches ahead of us expansively, yet