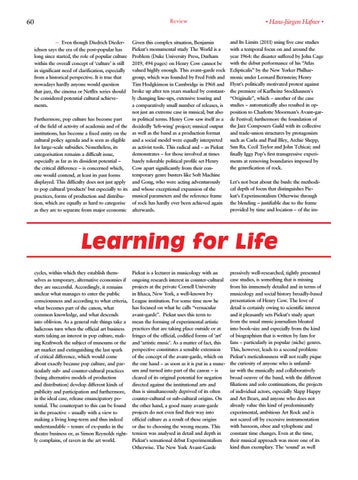 Given this complex situation, Benjamin Piekut’s monumental study The World is a Problem (Duke University Press, Durham 2019, 494 pages) on Henry Cow cannot be valued highly enough. This avant-garde rock group, which was founded by Fred Frith and Tim Hodgkinson in Cambridge in 1968 and broke up after ten years marked by constantly changing line-ups, extensive touring and a comparatively small number of releases, is not just an extreme case in musical, but also in political terms. Henry Cow saw itself as a Furthermore, pop culture has become part of the field of activity of academia and of the decidedly ‘left-wing’ project; musical output institutions, has become a fixed entity on the as well as the band as a production format cultural policy agenda and is seen as eligible and a social model were equally interpreted as activist tools. This radical and – as Piekut for large-scale subsidies. Nonetheless, its demonstrates – for those involved at times categorisation remains a difficult issue, barely tolerable political profile set Henry especially as far as its dissident potential – Cow apart significantly from their conthe critical difference – is concerned which, temporary genre busters like Soft Machine one would contend, at least its past forms displayed. This difficulty does not just apply and Gong, who were acting adventurously to pop cultural ‘products’ but especially to its and whose exceptional expansion of the musical parameters and the reference frame practices, forms of production and distribution, which are equally as hard to categorise of rock has hardly ever been achieved again as they are to separate from major economic afterwards. − Even though Diedrich Diederichsen says the era of the post-popular has long since started, the role of popular culture within the overall concept of ‘culture’ is still in significant need of clarification, especially from a historical perspective. It is true that nowadays hardly anyone would question that jazz, the cinema or Netflix series should be considered potential cultural achievements.

• Hans-Jürgen Hafner • and Its Limits (2011) using five case studies with a temporal focus on and around the year 1964: the disaster suffered by John Cage with the debut performance of his “Atlas Eclipticalis” by the New Yorker Philharmonic under Leonard Bernstein; Henry Flynt’s politically motivated protest against the premiere of Karlheinz Stockhausen’s “Originale”, which – another of the case studies – automatically also resulted in opposition to Charlotte Moorman’s Avant-garde Festival; furthermore the foundation of the Jazz Composers Guild with its collective and trade-union structures by protagonists such as Carla and Paul Bley, Archie Shepp, Sun Ra, Cecil Taylor and John Tchicai; and finally Iggy Pop’s first transgressive experiments at removing boundaries imposed by the genrefication of rock. Let’s not beat about the bush: the methodical depth of focus that distinguishes Piekut’s Experimentalism Otherwise through the blending – justifiable due to the frame provided by time and location – of the im-

Learning for Life cycles, within which they establish themselves as temporary, alternative economies if they are successful. Accordingly, it remains unclear what manages to enter the public consciousness and according to what criteria, what becomes part of the canon, what common knowledge, and what descends into oblivion. As a general rule things take a ludicrous turn when the official art business starts taking an interest in pop culture, making Kraftwerk the subject of museums or the art market and extinguishing the last spark of critical difference, which would come about exactly because pop culture, and particularly sub- and counter-cultural practices (being alternative models of production and distribution) develop different kinds of publicity and participation and furthermore, in the ideal case, release emancipatory potential. The counterpart to this can be found in the proactive – usually with a view to making a living long-term and thus indeed understandable – tenure of ex-punks in the theatre business or, as Simon Reynolds rightly complains, of ravers in the art world.

Piekut is a lecturer in musicology with an ongoing research interest in counter-cultural projects at the private Cornell University in Ithaca, New York, a well-known Ivy League institution. For some time now he has focused on what he calls “vernacular avant-garde”. Piekut uses this term to mean the forming of experimental artistic practices that are taking place outside or at fringes of the official, codified forms of ‘art’ and ‘artistic music’. As a matter of fact, this perspective constitutes a sensible extension of the concept of the avant-garde, which on the one hand – as soon as it is put in a museum and turned into part of the canon – is cleared of its original potential for negation directed against the institutional arts and thus is simultaneously deprived of its often counter-cultural or sub-cultural origins. On the other hand, a good many avant-garde projects do not even find their way into official culture as a result of these origins or due to choosing the wrong means. This tension was analysed in detail and depth in Piekut’s sensational debut Experimentalism Otherwise. The New York Avant-Garde

pressively well-researched, tightly presented case studies, is something that is missing from his immensely detailed and in terms of musicology and social history broadly-based presentation of Henry Cow. The love of detail is certainly owing to scientific interest and it pleasantly sets Piekut’s study apart from the usual music journalism bloated into book-size and especially from the kind of biographism that is written by fans for fans – particularly in popular (niche) genres. This, however, leads to a second problem: Piekut’s meticulousness will not really pique the curiosity of anyone who is unfamiliar with the musically and collaboratively broad oeuvre of the band, with the different filiations and solo continuations, the projects of individual actors, especially Slapp Happy and Art Bears, and anyone who does not already value this kind of predominantly experimental, ambitious Art Rock and is not scared off by excessive instrumentation with bassoon, oboe and xylophone and constant time changes. Even at the time, their musical approach was more one of its kind than exemplary. The ‘sound’ as well