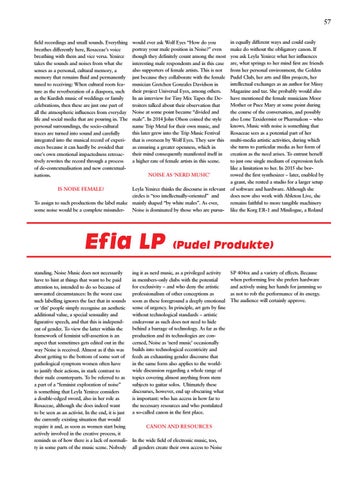 57 field recordings and small sounds. Everything breathes differently here, Rosaceae’s voice breathing with them and vice versa. Yenirce takes the sounds and noises from what she senses as a personal, cultural memory, a memory that remains fluid and permanently tuned to receiving: When cultural roots feature as the reverberation of a diaspora, such as the Kurdish music of weddings or family celebrations, then these are just one part of all the atmospheric influences from everyday life and social media that are pouring in. The personal surroundings, the socio-cultural traces are turned into sound and carefully integrated into the musical record of experiences because it can hardly be avoided that one’s own emotional impactedness retroactively rewrites the record through a process of de-contextualisation and new contextualisations.

would ever ask Wolf Eyes “How do you portray your male position in Noise?” even though they definitely count among the most interesting male respondents and in this case also supporters of female artists. This is not just because they collaborate with the female musician Gretchen Gonzales Davidson in their project Universal Eyes, among others. In an interview for Tiny Mix Tapes the Detroiters talked about their observation that Noise at some point became “divided and male”. In 2014 John Olson coined the style name Trip Metal for their own music, and this later grew into the Trip Music Festival that is overseen by Wolf Eyes. They saw this as ensuring a greater openness, which in their mind consequently manifested itself in a higher rate of female artists in this scene. Noise as ‘nerd music’

Leyla Yenirce thinks the discourse in relevant circles is “too intellectually-oriented” and To assign to such productions the label make mainly shaped “by white males”. As ever, Noise is dominated by those who are pursusome noise would be a complete misunderIs Noise female?

Ef ia LP standing. Noise Music does not necessarily have to hint at things that want to be paid attention to, intended to do so because of unwanted circumstances: In the worst case such labelling ignores the fact that in sounds or ‘din’ people simply recognise an aesthetic additional value, a special sensuality and figurative speech, and that this is independent of gender. To view the latter within the framework of feminist self-assertion is an aspect that sometimes gets edited out in the way Noise is received. Almost as if this was about getting to the bottom of some sort of pathological symptom women often have to justify their actions, in stark contrast to their male counterparts. To be referred to as a part of a “feminist exploration of noise” is something that Leyla Yenirce considers a double-edged sword, also in her role as Rosaceae, although she does indeed want to be seen as an activist. In the end, it is just the currently existing situation that would require it and, as soon as women start being actively involved in the creative process, it reminds us of how there is a lack of normality in some parts of the music scene. Nobody

in equally different ways and could easily make do without the obligatory canon. If you ask Leyla Yenirce what her influences are, what springs to her mind first are friends from her personal environment, the Golden Pudel Club, her arts and film projects, her intellectual exchanges as an author for Missy Magazine and taz. She probably would also have mentioned the female musicians Moor Mother or Puce Mary at some point during the course of the conversation, and possibly also Lone Taxidermist or Pharmakon – who knows. Music with noise is something that Rosaceae sees as a potential part of her multi-media artistic activities, during which she turns to particular media as her form of creation as the need arises. To entrust herself to just one single medium of expression feels like a limitation to her. In 2015 she borrowed the first synthesizer – later, enabled by a grant, she rented a studio for a larger setup of software and hardware. Although she does now also work with Ableton Live, she remains faithful to more tangible machinery like the Korg ER-1 and Minilogue, a Roland

ing it as nerd music, as a privileged activity in members-only clubs with the potential for exclusivity – and who deny the artistic professionalism of other conceptions as soon as these foreground a deeply emotional sense of urgency. In principle, art gets by fine without technological standards – artistic endeavour as such does not need to hide behind a barrage of technology. As far as the production and its technologies are concerned, Noise as ‘nerd music’ occasionally builds into technological eccentricity and feeds an exhausting gender discourse that in the same form also applies to the worldwide discussion regarding a whole range of topics covering almost anything from stem subjects to guitar solos. Ultimately these discourses, however, end up obscuring what is important: who has access in how far to the necessary resources and who postulated a so-called canon in the first place. Canon and resources In the wide field of electronic music, too, all genders create their own access to Noise

SP 404sx and a variety of effects. Because when performing live she prefers hardware and actively using her hands for jamming so as not to rob the performance of its energy. The audience will certainly approve.