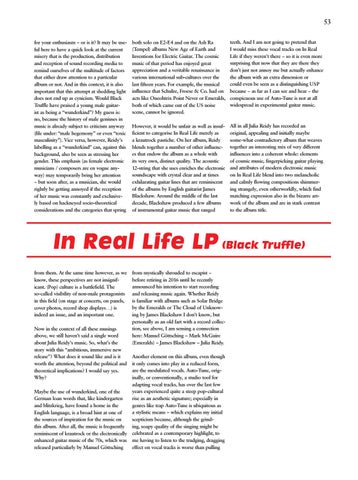 53 for your enthusiasm – or is it? It may be useful here to have a quick look at the current misery that is the production, distribution and reception of sound recording media to remind ourselves of the multitude of factors that either draw attention to a particular album or not. And in this context, it is also important that this attempt at shedding light does not end up as cynicism. Would Black Truffle have praised a young male guitarist as being a “wunderkind”? My guess is: no, because the history of male geniuses in music is already subject to criticism anyway (file under: “male hegemony” or even “toxic masculinity”). Vice versa, however, Reidy’s labelling as a “wunderkind” can, against this background, also be seen as stressing her gender. This emphasis (as female electronic musicians / composers are en vogue anyway) may temporarily bring her attention – but soon after, as a musician, she would rightly be getting annoyed if the reception of her music was constantly and exclusively based on hackneyed socio-theoretical considerations and the categories that spring

both solo on E2-E4 and on the Ash Ra (Tempel) albums New Age of Earth and Inventions for Electric Guitar. The cosmic music of that period has enjoyed great appreciation and a veritable renaissance in various international sub-cultures over the last fifteen years. For example, the musical influence that Schulze, Froese &amp; Co. had on acts like Oneohtrix Point Never or Emeralds, both of which came out of the US noise scene, cannot be ignored.

teeth. And I am not going to pretend that I would miss these vocal tracks on In Real Life if they weren’t there – so it is even more surprising that now that they are there they don’t just not annoy me but actually enhance the album with an extra dimension or could even be seen as a distinguishing USP because – as far as I can see and hear – the conspicuous use of Auto-Tune is not at all widespread in experimental guitar music.

However, it would be unfair as well as insufficient to categorise In Real Life merely as a krautrock pastiche. On her album, Reidy blends together a number of other influences that endow the album as a whole with its very own, distinct quality. The acoustic 12-string that she uses enriches the electronic soundscape with crystal clear and at times exhilarating guitar lines that are reminiscent of the albums by English guitarist James Blackshaw. Around the middle of the last decade, Blackshaw produced a few albums of instrumental guitar music that ranged

All in all Julia Reidy has recorded an original, appealing and initially maybe some-what contradictory album that weaves together an interesting mix of very different influences into a coherent whole: elements of cosmic music, fingerpicking guitar playing and attributes of modern electronic music on In Real Life blend into two melancholic and calmly flowing compositions shimmering strangely, even otherworldly, which find matching expression also in the bizarre artwork of the album and are in stark contrast to the album title.

In Real Life LP (Black Truffle) from them. At the same time however, as we know, these perspectives are not insignificant. (Pop) culture is a battlefield. The so-called visibility of non-male protagonists in this field (on stage at concerts, on panels, cover photos, record shop displays…) is indeed an issue, and an important one. Now in the context of all these musings above, we still haven’t said a single word about Julia Reidy’s music. So, what’s the story with this “ambitious, immersive new release”? What does it sound like and is it worth the attention, beyond the political and theoretical implications? I would say yes. Why?

from mystically shrouded to escapist – before retiring in 2016 until he recently announced his intention to start recording and releasing music again. Whether Reidy is familiar with albums such as Solar Bridge by the Emeralds or The Cloud of Unknowing by James Blackshaw I don’t know, but personally as an old fart with a record collection, see above, I am sensing a connection here: Manuel Göttsching – Mark McGuire (Emeralds) – James Blackshaw – Julia Reidy.

Another element on this album, even though it only comes into play in a reduced form, are the modulated vocals. Auto-Tune, originally, or conventionally, a studio tool for adapting vocal tracks, has over the last few years experienced quite a steep pop-cultural Maybe the use of wunderkind, one of the rise as an aesthetic signature; especially in German loan words that, like kindergarten genres like trap Auto-Tune is ubiquitous as and blitzkrieg, have found a home in the a stylistic means – which explains my initial English language, is a broad hint at one of scepticism because, although the grindthe sources of inspiration for the music on ing, soapy quality of the singing might be this album. After all, the music is frequently reminiscent of krautrock or the electronically celebrated as a contemporary highlight, to enhanced guitar music of the 70s, which was me having to listen to the trudging, dragging effect on vocal tracks is worse than pulling released particularly by Manuel Göttsching