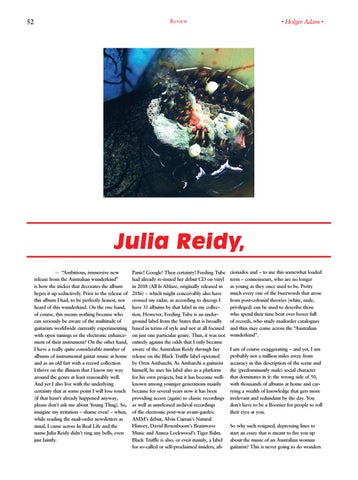 Julia Reidy, − “Ambitious, immersive new release from the Australian wunderkind” is how the sticker that decorates the album hypes it up seductively. Prior to the release of this album I had, to be perfectly honest, not heard of this wunderkind. On the one hand, of course, this means nothing because who can seriously be aware of the multitude of guitarists worldwide currently experimenting with open tunings or the electronic enhancement of their instrument? On the other hand, I have a really quite considerable number of albums of instrumental guitar music at home and as an old fart with a record collection I thrive on the illusion that I know my way around the genre at least reasonably well. And yet I also live with the underlying certainty that at some point I will lose touch (if that hasn’t already happened anyway, please don’t ask me about Young Thug). So, imagine my irritation – shame even! – when, while reading the mail-order newsletters as usual, I came across In Real Life and the name Julia Reidy didn’t ring any bells, even just faintly.

Panic! Google! Then certainty! Feeding Tube had already re-issued her debut CD on vinyl in 2018 (All Is Ablaze, originally released in 2016) – which might conceivably also have crossed my radar, as according to discogs I have 31 albums by that label in my collection. However, Feeding Tube is an underground label from the States that is broadly based in terms of style and not at all focused on just one particular genre. Thus, it was not entirely against the odds that I only became aware of the Australian Reidy through her release on the Black Truffle label operated by Oren Ambarchi. As Ambarchi a guitarist himself, he uses his label also as a platform for his own projects, but it has become wellknown among younger generations mainly because for several years now it has been providing access (again) to classic recordings as well as unreleased archival recordings of the electronic post-war avant-gardes: AMM’s debut, Alvin Curran’s Natural History, David Rosenboom’s Brainwave Music and Annea Lockwood’s Tiger Balm. Black Truffle is also, or even mainly, a label for so-called or self-proclaimed insiders, afi-

cionados and – to use this somewhat loaded term – connoisseurs, who are no longer as young as they once used to be. Pretty much every one of the buzzwords that arose from post-colonial theories (white, male, privileged) can be used to describe those who spend their time bent over boxes full of records, who study mailorder catalogues and thus may come across the “Australian wunderkind”. I am of course exaggerating – and yet, I am probably not a million miles away from accuracy in this description of the scene and the (predominantly male) social character that dominates in it: the wrong side of 50, with thousands of albums at home and carrying a wealth of knowledge that gets more irrelevant and redundant by the day. You don’t have to be a Boomer for people to roll their eyes at you. So why such resigned, depressing lines to start an essay that is meant to fire you up about the music of an Australian woman guitarist? This is never going to do wonders