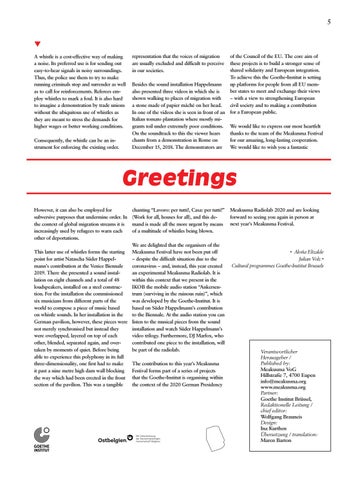 ▶ A whistle is a cost-effective way of making a noise. Its preferred use is for sending out easy-to-hear signals in noisy surroundings. Thus, the police use them to try to make running criminals stop and surrender as well as to call for reinforcements. Referees employ whistles to mark a foul. It is also hard to imagine a demonstration by trade unions without the ubiquitous use of whistles as they are meant to stress the demands for higher wages or better working conditions. Consequently, the whistle can be an instrument for enforcing the existing order.

of the Council of the EU. The core aim of these projects is to build a stronger sense of shared solidarity and European integration. To achieve this the Goethe-Institut is setting up platforms for people from all EU memBesides the sound installation Happelmann ber states to meet and exchange their views also presented three videos in which she is – with a view to strengthening European shown walking to places of migration with civil society and to making a contribution a stone made of papier mâché on her head. In one of the videos she is seen in front of an for a European public. Italian tomato plantation where mostly migrants toil under extremely poor conditions. We would like to express our most heartfelt thanks to the team of the Meakusma Festival On the soundtrack to this the viewer hears for our amazing, long-lasting cooperation. chants from a demonstration in Rome on We would like to wish you a fantastic December 15, 2018. The demonstrators are representation that the voices of migration are usually excluded and difficult to perceive in our societies.

Greetings However, it can also be employed for subversive purposes that undermine order. In the context of global migration streams it is increasingly used by refugees to warn each other of deportations.

chanting “Lavoro: per tutti!, Casa: per tutti!” (Work for all, houses for all), and this demand is made all the more urgent by means of a multitude of whistles being blown.

We are delighted that the organisers of the This latter use of whistles forms the starting Meakusma Festival have not been put off – despite the difficult situation due to the point for artist Natascha Süder Happelcoronavirus – and, instead, this year created mann’s contribution at the Venice Biennale an experimental Meakusma Radiolab. It is 2019. There she presented a sound instalwithin this context that we present in the lation on eight channels and a total of 48 IKOB the mobile audio station “Ankersenloudspeakers, installed on a steel constructrum (surviving in the ruinous ruin)”, which tion. For the installation she commissioned was developed by the Goethe-Institut. It is six musicians from different parts of the based on Süder Happelmann’s contribution world to compose a piece of music based to the Biennale. At the audio station you can on whistle sounds. In her installation in the German pavilion, however, these pieces were listen to the musical pieces from the sound installation and watch Süder Happelmann’s not merely synchronised but instead they video trilogy. Furthermore, DJ Marfox, who were overlapped, layered on top of each contributed one piece to the installation, will other, blended, separated again, and overbe part of the radiolab. taken by moments of quiet. Before being able to experience this polyphony in its full The contribution to this year’s Meakusma three-dimensionality, one first had to make Festival forms part of a series of projects it past a nine metre high dam wall blocking the way which had been erected in the front that the Goethe-Institut is organising within the context of the 2020 German Presidency section of the pavilion. This was a tangible

Meakusma Radiolab 2020 and are looking forward to seeing you again in person at next year’s Meakusma Festival.