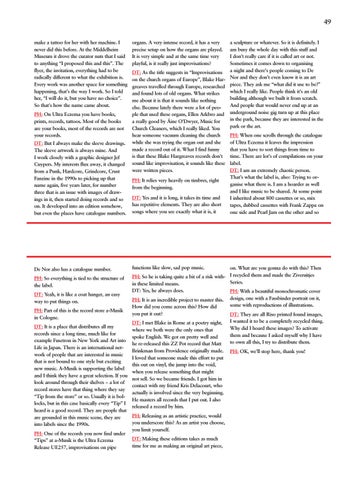 49 make a tattoo for her with her machine. I never did this before. At the Middelheim Museum it drove the curator nuts that I said to anything “I proposed this and this”. The flyer, the invitation, everything had to be radically different to what the exhibition is. Every work was another space for something happening, that’s the way I work. So I told her, “I will do it, but you have no choice”. So that’s how the name came about.

DT: But I always make the sleeve drawings. The sleeve artwork is always mine. And I work closely with a graphic designer Jef Cuypers. My interests flux away, it changed from a Punk, Hardcore, Grindcore, Crust Fanzine in the 1990s to picking up that name again, five years later, for number three that is an issue with images of drawings in it, then started doing records and so on. It developed into an edition somehow, but even the places have catalogue numbers.

a sculpture or whatever. So it is definitely. I am busy the whole day with this stuff and I don’t really care if it is called art or not. Sometimes it comes down to organising DT: As the title suggests in “Improvisations a night and there’s people coming to De on the church organs of Europe”, Blake Har- Nor and they don’t even know it is an art greaves travelled through Europe, researched piece. They ask me “what did it use to be?” which I really like. People think it’s an old and found lots of old organs. What strikes building although we built it from scratch. me about it is that it sounds like nothing And people that would never end up at an else. Because lately there were a lot of people that used these organs, Ellen Arkbro and underground noise gig turn up at this place in the park, because they are interested in the a really good by Áine O’Dwyer, Music for park or the art. Church Cleaners, which I really liked. You hear someone vacuum cleaning the church PH: When one scrolls through the catalogue while she was trying the organ out and she of Ultra Eczema it leaves the impression made a record out of it. What I find funny that you have to sort things from time to is that these Blake Hargreaves records don’t time. There are lot’s of compilations on your sound like improvisation, it sounds like these label. were written pieces. DT: I am an extremely chaotic person. That’s what the label is, also: Trying to orPH: It relies very heavily on timbres, right ganise what there is. I am a hoarder as well from the beginning. and I like music to be shared. At some point DT: Yes and it is long, it takes its time and I inherited about 800 cassettes or so, mix has repetitive elements. They are also short tapes, dubbed cassettes with Frank Zappa on songs where you see exactly what it is, it one side and Pearl Jam on the other and so

De Nor also has a catalogue number.

PH: On Ultra Eczema you have books, prints, records, tattoos. Most of the books are your books, most of the records are not your records.

PH: So everything is tied to the structure of the label. DT: Yeah, it is like a coat hanger, an easy way to put things on. PH: Part of this is the record store a-Musik in Cologne. DT: It is a place that distributes all my records since a long time, much like for example Fusetron in New York and Art into Life in Japan. There is an international network of people that are interested in music that is not bound to one style but exciting new music. A-Musik is supporting the label and I think they have a great selection. If you look around through their shelves – a lot of record stores have that thing where they say “Tip from the store” or so. Usually it is bollocks, but in this case basically every “Tip” I heard is a good record. They are people that are grounded in this music scene, they are into labels since the 1990s. PH: One of the records you now find under “Tips” at a-Musik is the Ultra Eczema Release UE257, improvisations on pipe

organs. A very intense record, it has a very precise setup on how the organs are played. It is very simple and at the same time very playful, is it really just improvisations?

on. What are you gonna do with this? Then PH: So he is taking quite a bit of a risk with- I recycled them and made the Ziveruitjes Series. in these limited means. DT: Yes, he always does. PH: It is an incredible project to master this. How did you come across this? How did you put it out? DT: I met Blake in Rome at a poetry night, where we both were the only ones that spoke English. We got on pretty well and he re-released this ZZ Pot record that Matt Brinkman from Providence originally made. I loved that someone made this effort to put this out on vinyl, the jump into the void, when you release something that might not sell. So we became friends. I got him in contact with my friend Kris Delacourt, who actually is involved since the very beginning. He masters all records that I put out. I also released a record by him. PH: Releasing as an artistic practice, would you underscore this? As an artist you choose, you limit yourself. DT: Making these editions takes as much time for me as making an original art piece,

PH: With a beautiful monochromatic cover design, one with a Fassbinder portrait on it, some with reproductions of illustrations. DT: They are all Riso printed found images, I wanted it to be a completely recycled thing. Why did I hoard these images? To activate them and because I asked myself why I have to own all this, I try to distribute them. PH: OK, we’ll stop here, thank you!