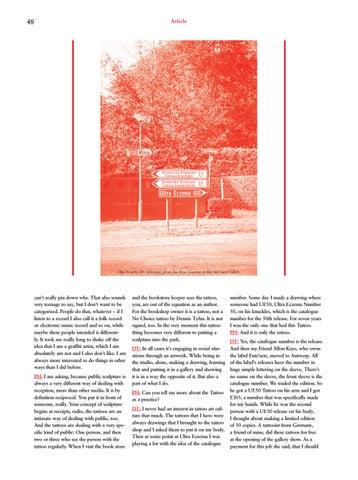 can’t really pin down why. That also sounds very teenage to say, but I don’t want to be categorised. People do that, whatever – if I listen to a record I also call it a folk record or electronic music record and so on, while maybe these people intended it differently. It took me really long to shake off the idea that I am a graffiti artist, which I am absolutely am not and I also don’t like. I am always more interested to do things in other ways than I did before. PH: I am asking, because public sculpture is always a very different way of dealing with reception, more than other media. It is by definition reciprocal. You put it in front of someone, really. Your concept of sculpture begins at receipts, radio, the tattoos are an intimate way of dealing with public, too. And the tattoos are dealing with a very specific kind of public: One person, and then two or three who see the person with the tattoo regularly. When I visit the book store

and the bookstore keeper sees the tattoo, you, are out of the equation as an author. For the bookshop owner it is a tattoo, not a No Choice tattoo by Dennis Tyfus. It is not signed, too. In the very moment this tattoo thing becomes very different to putting a sculpture into the park. DT: In all cases it’s engaging in social situations through an artwork. While being in the studio, alone, making a drawing, framing that and putting it in a gallery and showing it is in a way the opposite of it. But also a part of what I do. PH: Can you tell me more about the Tattoo as a practice? DT: I never had an interest in tattoo art culture that much. The tattoos that I have were always drawings that I brought to the tattoo shop and I asked them to put it on my body. Then at some point at Ultra Eczema I was playing a lot with the idea of the catalogue

number. Some day I made a drawing where someone had UE50, Ultra Eczema Number 50, on his knuckles, which is the catalogue number for the 50th release. For seven years I was the only one that had this Tattoo. PH: And it is only the tattoo. DT: Yes, the catalogue number is the release. And then my Friend Allon Kaye, who owns the label Entr’acte, moved to Antwerp. All of the label’s releases have the number in huge simple lettering on the sleeve. There’s no name on the sleeve, the front sleeve is the catalogue number. We traded the edition. So he got a UE50 Tattoo on his arm and I got E103, a number that was specifically made for my hands. While he was the second person with a UE50 release on his body, I thought about making a limited edition of 50 copies. A tattooist from Germany, a friend of mine, did these tattoos for free at the opening of the gallery show. As a payment for this job she said, that I should