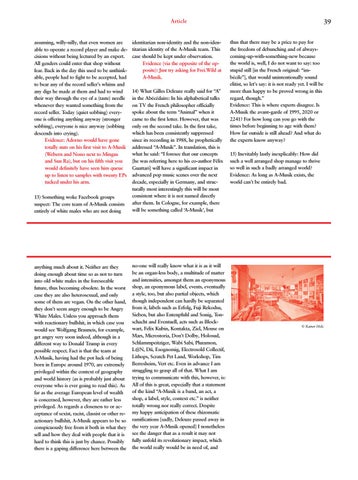 assuming, willy-nilly, that even women are able to operate a record player and make decisions without being lectured by an expert. All genders could enter that shop without fear. Back in the day this used to be unthinkable, people had to fight to be accepted, had to bear any of the record seller’s whims and any digs he made at them and had to wind their way through the eye of a (taste) needle whenever they wanted something from the record seller. Today (quiet sobbing) everyone is offering anything anyway (stronger sobbing), everyone is nice anyway (sobbing descends into crying). Evidence: Adorno would have gone totally nuts on his first visit to A-Musik (Webern and Nono next to Mingus and Sun Ra), but on his fifth visit you would definitely have seen him queue up to listen to samples with twenty EPs tucked under his arm.

13) Something woke Facebook groups suspect: The core team of A-Musik consists entirely of white males who are not doing

14) What Gilles Deleuze really said for “A” in the Abécédaire: In his alphabetical talks on TV the French philosopher officially spoke about the term “Animal” when it came to the first letter. However, that was only on the second take. In the first take, which has been consistently suppressed since its recording in 1988, he prophetically addressed “A-Musik”. In translation, this is what he said: “I foresee that our concepts [he was referring here to his co-author Félix Guattari] will have a significant impact in advanced pop music scenes over the next decade, especially in Germany, and structurally most interestingly this will be most consistent where it is not named directly after them. In Cologne, for example, there will be something called ‘A-Musik’, but

anything much about it. Neither are they doing enough about time so as not to turn into old white males in the foreseeable future, thus becoming obsolete. In the worst case they are also heterosexual, and only some of them are vegan. On the other hand, they don’t seem angry enough to be Angry White Males. Unless you approach them with reactionary bullshit, in which case you would see Wolfgang Brauneis, for example, get angry very soon indeed, although in a different way to Donald Trump in every possible respect. Fact is that the team at A-Musik, having had the pot luck of being born in Europe around 1970, are extremely privileged within the context of geography and world history (as is probably just about everyone who is ever going to read this). As far as the average European level of wealth is concerned, however, they are rather less privileged. As regards a closeness to or acceptance of sexist, racist, classist or other reactionary bullshit, A-Musik appears to be so conspicuously free from it both in what they sell and how they deal with people that it is hard to think this is just by chance. Possibly there is a gaping difference here between the

no-one will really know what it is as it will be an organ-less body, a multitude of matter and intensities, amongst them an eponymous shop, an eponymous label, events, eventually a style, too, but also partial objects, which though independent can hardly be separated from it, labels such as Erfolg, Fuji Rekodsu, Sieben, but also Entenpfuhl and Sonig, Tonschacht and Eventuell, acts such as Blockwart, Felix Kubin, Kontakta, Ziel, Mouse on Mars, Microstoria, Don’t Dolby, Holosud, Schlammpeitziger, Wabi Sabi, Pluramon, L@N, Dü, Esognomig, Electrosold Collectif, Lithops, Scratch Pet Land, Workshop, Tim Berresheim, Vert etc. Even in advance I am struggling to grasp all of that. What I am trying to communicate with this, however, is: All of this is great, especially that a statement of the kind “A-Musik is a band, an act, a shop, a label, style, context etc.” is neither totally wrong nor really correct. Despite my happy anticipation of these rhizomatic ramifications [sadly, Deleuze passed away in the very year A-Musik opened] I nonetheless see the danger that as a result it may not fully unfold its revolutionary impact, which the world really would be in need of, and

thus that there may be a price to pay for the freedom of debunching and of alwayscoming-up-with-something-new because the world is, well, I do not want to say: too stupid still [in the French original: “imbécile”], that would unintentionally sound elitist, so let’s say: it is not ready yet. I will be more than happy to be proved wrong in this regard, though.” Evidence: This is where experts disagree. Is A-Musik the avant-garde of 1995, 2020 or 2241? For how long can you go with the times before beginning to age with them? How far outside is still ahead? And what do the experts know anyway? 15) Inevitably lastly inexplicably: How did such a well arranged shop manage to thrive so well in such a badly arranged world? Evidence: As long as A-Musik exists, the world can’t be entirely bad.