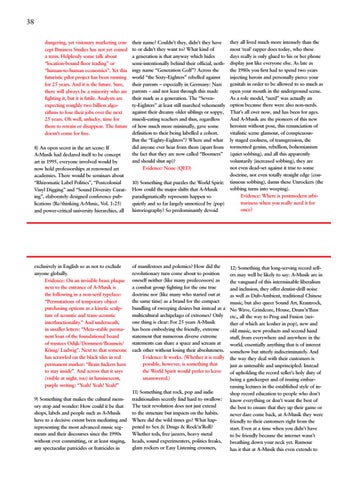 38 dangering, yet visionary marketing concept Business Studies has not yet coined a term. Helplessly some talk about “location-bound floor trading” or “human-to-human economics”. Yet this futuristic pilot project has been running for 25 years. And it is the future. Sure, there will always be a minority who are fighting it, but it is futile. Analysts are expecting roughly two billion algorithms to lose their jobs over the next 25 years. Oh well, unlucky, time for them to retrain or disappear. The future doesn’t come for free. 8) An open secret in the art scene: If A-Musik had declared itself to be concept art in 1995, everyone involved would by now hold professorships at renowned art academies. There would be seminars about “Rhizomatic Label Politics”, “Postcolonial Vinyl Digging” and “Sound Diversity Curating”, elaborately designed conference publications (Re/thinking A-Music, Vol. 1-25) and power-critical university hierarchies, all

exclusively in English so as not to exclude anyone globally. Evidence: On an invisible brass plaque next to the entrance of A-Musik is the following in a non-serif typeface: “Permutations of temporary object purchasing options as a kinetic sculpture of acoustic and trans-acoustic interfunctionality.” And underneath, in smaller letters: “Meta-stable permanent loan of the foundational board of trustees Odijk/Dommert/Brauneis/ König/ Ludwig”. Next to that someone has scrawled on the black tiles in red permanent marker: “Brain fuckers have to stay inside”. And across that it says (visible at night, too) in luminescent, purple writing: “Yeah! Yeah! Yeah!” 9) Something that makes the cultural memory stop and wonder: How could it be that shops, labels and people such as A-Musik have to a decisive extent been mediating and representing the most advanced music segments and their discourses since the 1990s without ever committing, or at least staging, any spectacular patricides or fratricides in

their name? Couldn’t they, didn’t they have to or didn’t they want to? What kind of a generation is that anyway which hides semi-intentionally behind their official, nothingy name “Generation Golf”? Across the world “the Sixty-Eighters” rebelled against their parents – especially in Germany: Nazi parents – and not least through this made their mark as a generation. The “Seventy-Eighters” at least still marched vehemently against their dreamy older siblings or soppy, muesli-eating teachers and thus, regardless of how much more minimally, gave some definition to their being labelled a cohort. But the “Eighty-Eighters”? Where and what did anyone ever hear from them (apart from the fact that they are now called “Boomers” and should shut up)? Evidence: None (QED) 10) Something that puzzles the World Spirit: How could the major shifts that A-Musik paradigmatically represents happen so quietly and so far largely unnoticed by (pop) historiography? So predominantly devoid

of manifestoes and polemics? How did the revolutionary turn come about to position oneself neither (like many predecessors) as a combat group fighting for the one true doctrine nor (like many who started out at the same time) as a brand for the compact bundling of sweeping desires but instead as a multicultural archipelago of extremes? Only one thing is clear: For 25 years A-Musik has been embodying the friendly, extreme statement that numerous diverse extreme statements can share a space and scream at each other without losing their absoluteness. Evidence: It works. (Whether it is really possible, however, is something that the World Spirit would prefer to leave unanswered.) 11) Something that rock, pop and indie traditionalists secretly find hard to swallow: The tacit revolution does not just extend to the structure but impacts on the habits. Where did the wild times go? What happened to Sex &amp; Drugs &amp; Rock’n’Roll? Whether teds, free jazzers, heavy metal heads, sound experimenters, politics freaks, glam rockers or Easy Listening crooners,

they all lived much more intensely than the most ‘real’ rapper does today, who these days really is only glued to his or her phone display just like everyone else. As late as the 1980s you first had to spend two years injecting heroin and personally pierce your genitals in order to be allowed to so much as open your mouth in the underground scene. As a role model, “nerd” was actually an option because there were also non-nerds. That’s all over now, and has been for ages. And A-Musik are the pioneers of this new heroism without pose, this renunciation of vitalistic scene glamour, of conspicuously staged coolness, of transgression, the tormented genius, rebellion, bohemianism (quiet sobbing), and all this apparently voluntarily (increased sobbing), they are not even dead-set against it true to some doctrine, not even totally straight edge (continuous sobbing), damn these Unrockers (the sobbing turns into weeping). Evidence: Where is postmodern arbitrariness when you really need it for once?

12) Something that long-serving record sellers may well be likely to say: A-Musik are in the vanguard of this interminable liberalism and inclusion, they offer dentist-drill noise as well as Dub-Ambient, traditional Chinese music, but also queer Sound Art, Krautrock, No Wave, Grindcore, House, Drum’n’Bass etc., all the way to Prog and Fusion (neither of which are kosher in pop), new and old music, new products and second hand stuff, from everywhere and anywhere in the world, essentially anything that is of interest somehow but utterly indiscriminately. And the way they deal with their customers is just as untenable and unprincipled: Instead of upholding the record seller’s holy duty of being a gatekeeper and of issuing embarrassing lectures in the established style of inshop record education to people who don’t know everything or don’t want the best of the best to ensure that they up their game or never dare come back, at A-Musik they were friendly to their customers right from the start. Even at a time when you didn’t have to be friendly because the internet wasn’t breathing down your neck yet. Rumour has it that at A-Musik this even extends to