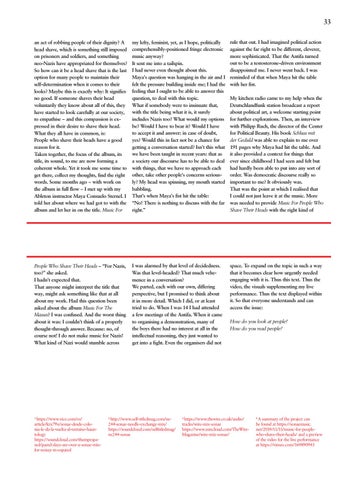 33 an act of robbing people of their dignity? A head shave, which is something still imposed on prisoners and soldiers, and something neo-Nazis have appropriated for themselves? So how can it be a head shave that is the last option for many people to maintain their self-determination when it comes to their looks? Maybe this is exactly why: It signifies no good. If someone shaves their head voluntarily they know about all of this, they have started to look carefully at our society, to empathise – and this compassion is expressed in their desire to shave their head. What they all have in common, is: People who shave their heads have a good reason for it. Taken together, the focus of the album, its title, its sound, to me are now forming a coherent whole. Yet it took me some time to get there, collect my thoughts, find the right words. Some months ago – with work on the album in full flow – I met up with my Ableton instructor Maya Consuelo Sternel. I told her about where we had got to with the album and let her in on the title. Music For

my lefty, feminist, yet, as I hope, politically comprehensibly-positioned fringe electronic music anyway? It sent me into a tailspin. I had never even thought about this. Maya’s question was hanging in the air and I felt the pressure building inside me; I had the feeling that I ought to be able to answer this question, to deal with this topic. What if somebody were to insinuate that, with the title being what it is, it surely includes Nazis too? What would my options be? Would I have to bear it? Would I have to accept it and answer: in case of doubt, yes? Would this in fact not be a chance for getting a conversation started? Isn’t this what we have been taught in recent years: that as a society our discourse has to be able to deal with things, that we have to approach each other, take other people’s concerns seriously? My head was spinning, my mouth started babbling. That’s when Maya’s fist hit the table: “No! There is nothing to discuss with the far right.”

rule that out. I had imagined political action against the far right to be different, cleverer, more sophisticated. That the Antifa turned out to be a testosterone-driven environment disappointed me. I never went back. I was reminded of that when Maya hit the table with her fist.

People Who Shave Their Heads – “For Nazis, too?” she asked. I hadn’t expected that. That anyone might interpret the title that way, might ask something like that at all about my work. Had this question been asked about the album Music For The Masses? I was confused. And the worst thing about it was: I couldn’t think of a properly thought-through answer. Because: no, of course not! I do not make music for Nazis! What kind of Nazi would stumble across

I was alarmed by that level of decidedness. Was that level-headed? That much vehemence in a conversation? We parted, each with our own, differing perspective, but I promised to think about it in more detail. Which I did, or at least tried to do. When I was 14 I had attended a few meetings of the Antifa. When it came to organising a demonstration, many of the boys there had no interest at all in the intellectual reasoning, they just wanted to get into a fight. Even the organisers did not

space. To expand on the topic in such a way that it becomes clear how urgently needed engaging with it is. Thus this text. Thus the video, the visuals supplementing my live performance. Thus the text displayed within it. So that everyone understands and can access the issue:

My kitchen radio came to my help when the Deutschlandfunk station broadcast a report about political art, a welcome starting point for further explorations. Then, an interview with Philipp Ruch, the director of the Center for Political Beauty. His book Schluss mit der Geduld was able to explain to me over 191 pages why Maya had hit the table. And it also provided a context for things that ever since childhood I had seen and felt but had hardly been able to put into any sort of order. Was democratic discourse really so important to me? It obviously was. That was the point at which I realised that I could not just leave it at the music. More was needed to provide Music For People Who Shave Their Heads with the right kind of

How do you look at people? How do you read people?