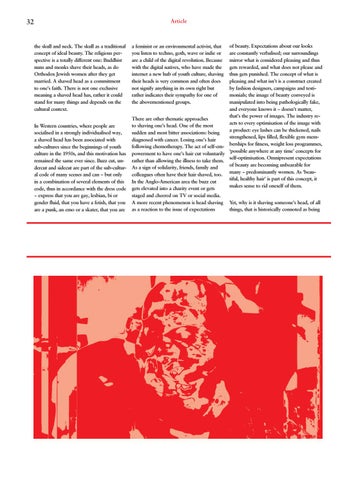 the skull and neck. The skull as a traditional concept of ideal beauty. The religious perspective is a totally different one: Buddhist nuns and monks shave their heads, as do Orthodox Jewish women after they get married. A shaved head as a commitment to one’s faith. There is not one exclusive meaning a shaved head has, rather it could stand for many things and depends on the cultural context. In Western countries, where people are socialised in a strongly individualised way, a shaved head has been associated with sub-cultures since the beginnings of youth culture in the 1950s, and this motivation has remained the same ever since. Buzz cut, undercut and sidecut are part of the sub-cultural code of many scenes and can – but only in a combination of several elements of this code, thus in accordance with the dress code – express that you are gay, lesbian, bi or gender fluid, that you have a fetish, that you are a punk, an emo or a skater, that you are

of beauty. Expectations about our looks are constantly verbalised; our surroundings mirror what is considered pleasing and thus gets rewarded, and what does not please and thus gets punished. The concept of what is pleasing and what isn’t is a construct created by fashion designers, campaigns and testimonials; the image of beauty conveyed is manipulated into being pathologically fake, and everyone knows it – doesn’t matter, that’s the power of images. The industry reThere are other thematic approaches acts to every optimisation of the image with to shaving one’s head. One of the most a product: eye lashes can be thickened, nails sudden and most bitter associations: being strengthened, lips filled, flexible gym memdiagnosed with cancer. Losing one’s hair berships for fitness, weight loss programmes, following chemotherapy. The act of self-em‘possible anywhere at any time’ concepts for powerment to have one’s hair cut voluntarily self-optimisation. Omnipresent expectations rather than allowing the illness to take them. of beauty are becoming unbearable for As a sign of solidarity, friends, family and many – predominantly women. As ‘beaucolleagues often have their hair shaved, too. tiful, healthy hair’ is part of this concept, it In the Anglo-American area the buzz cut makes sense to rid oneself of them. gets elevated into a charity event or gets staged and cheered on TV or social media. A more recent phenomenon is head shaving Yet, why is it shaving someone’s head, of all things, that is historically connoted as being as a reaction to the issue of expectations a feminist or an environmental activist, that you listen to techno, goth, wave or indie or are a child of the digital revolution. Because with the digital natives, who have made the internet a new hub of youth culture, shaving their heads is very common and often does not signify anything in its own right but rather indicates their sympathy for one of the abovementioned groups.