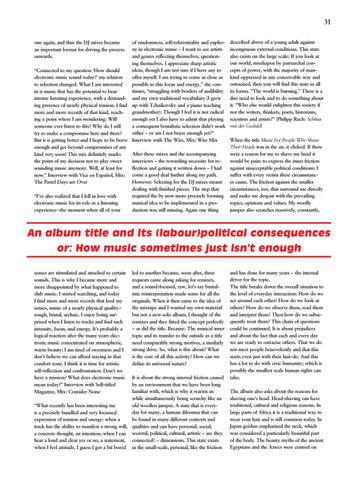 31 of randomness, self-referentiality and euphony in electronic music – I want to see artists and genres reflecting themselves, questioning themselves. I appreciate sharp artistic ideas, though I am not sure if I have any to “Connected to my question ‘How should offer myself. I am trying to come as close as electronic music sound today?’ my relation possible to this focus and energy,” she conto selection changed. What I am interested tinues, “struggling with borders of audibility in is music that has the potential to bear intense listening experience, with a demand- and my own traditional vocabulary (I grew ing presence of nearly physical tension. I find up with Tchaikovsky and a piano teaching grandmother). Though I feel it is not radical more and more records of that kind, reachenough yet I also have to admit that playing ing a point where I am wondering: Will a consequent brutalistic selection didn’t work someone ever listen to this? Why do I still either – or am I not brave enough yet?” try to make a compromise here and there? But it is getting better and I hope to be brave Interview with The Wire, Mix: Wire Mix enough and get beyond compromises of any After these mixes and the accompanying kind very soon! This mix definitely marks interviews – the rewarding necessity for rethe point of my decision not to play sweet flection and getting it written down – I had sounding music anymore. Well, at least for now.” Interview with Vice en Español, Mix: come a good deal further along my path. However: Selecting for the DJ mixes meant The Pastel Days are Over dealing with finished pieces. The step that required the by now more precisely forming “I’ve also realized that I fell in love with musical idea to be implemented in a proelectronic music for its role as a listening duction was still missing. Again one thing experience—the moment when all of your one again, and thus the DJ mixes became an important format for driving the process onwards.

described above of a young adult against incongruous external conditions. This state also exists on the large scale: If you look at our world, misshapen by patriarchal concepts of power, with the majority of mankind oppressed in any conceivable way and ostracised, then you will find this state in all its forms. “The world is burning.” There is a dire need to look and to do something about it. “Who else would enlighten this society if not the writers, thinkers, poets, historians, scientists and artists?” (Philipp Ruch: Schluss mit der Geduld) When the title Music For People Who Shave Their Heads was in the air, it clicked. If there were a reason for me to shave my head it would be pain: to express the inner friction against unacceptable political conditions; I suffer with every victim these circumstances cause. The friction against the smaller circumstances, too, that surround me directly and make me despair with the prevailing topics, opinions and values. My woolly jumper also scratches massively, constantly,

An album title and its (labour)political consequences or: How music sometimes just isn’t enough senses are stimulated and attached to certain sounds. This is why I became more and more disappointed by what happened to club music. I started searching, and today I find more and more records that feed my senses, music of a nearly physical quality— rough, brutal, archaic. I enjoy being surprised when I listen to tracks and find such intensity, focus, and energy. It’s probably a logical reaction after the many years electronic music concentrated on atmospheric, warm beauty; I am tired of sweetness and I don’t believe we can afford staying in that comfort zone. I think it is time for artistic self-reflection and confrontation. Don’t we have a mission? What does electronic music mean today?” Interview with Self-titled Magazine, Mix: Consider Noise

led to another because, soon after, three requests came along asking for remixes, and a sound-focused, raw, let’s say brutalistic reinterpretation made sense for all the originals. When it then came to the idea of the mixtape and I wanted my own material but not a new solo album, I thought of the remixes and they fitted the concept perfectly – as did the title. Because: The musical inner topic and its transfer to the outside as a title need comparably strong motives, a similarly strong drive. So, what is this about? What is the core of all this activity? How can we define its universal nature?

It is about the strong internal friction caused by an environment that we have been long familiar with, which is why it warms us while simultaneously being scratchy like an old woollen jumper. A state that is every“What recently has been interesting me day for many, a human dilemma that can is a precisely bundled and very focussed be found in many different contexts and expression of tension and energy: when a track has the ability to manifest a strong will, qualities and can have personal, social, a concrete thought, an intention; when I can societal, political, cultural, artistic – are they hear a loud and clear yes or no, a statement, connected? – dimensions. This state exists when I feel attitude. I guess I got a bit bored in the small-scale, personal, like the friction

and has done for many years – the internal driver for the topic. The title breaks down the overall situation to the level of everyday interaction: How do we act around each other? How do we look at others? How do we observe them, read them and interpret them? Then how do we subsequently treat them? This chain of questions could be continued. It is about prejudices and about the fact that each and every day we are ready to ostracise others. That we do not meet people benevolently and that this starts even just with their hair-do. And this has a lot to do with civic humanity; which is possibly the smallest scale human rights can take. The album also asks about the reasons for shaving one’s head. Head-shaving can have traditional, cultural and religious reasons. In large parts of Africa it is a traditional way to wear your hair and is still common today. In Japan geishas emphasised the neck, which was considered a particularly beautiful part of the body. The beauty myths of the ancient Egyptians and the Aztecs were centred on